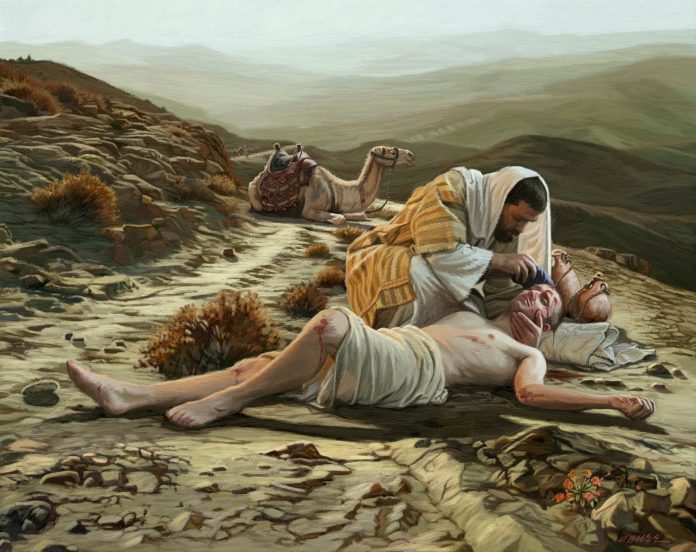 Luke 10:36
36 which of these three, do you think, proved to be a neighbor to the man who fell among the robbers?

This question is a response to another question that Jesus was asked. And who is my neighbor? This is a question Jesus was asked after which he went on to tell the parable of the good Samaritan to answer the question after which he posed the same question back to the lawyer who had asked it in the first place.
The parable not only answers the question “who is my neighbor?” it also answers the question “How should I treat my neighbor?”
Here you have a man robbed and left for dead by the roadside. The first two people who see him walk past without doing anything. These two people are the ones you would think would be moved with compassion to help him because of what they do. One is a priest and the other a Levite. The third person a Samaritan does what is expected of a good neighbor.

Luke 10:33-35
33 But a Samaritan, as he journeyed, came to where he was, and when he saw him, he had compassion. 34 He went to him and bound up his wounds, pouring on oil and wine. Then he set him on his own animal and brought him to an inn and took care of him.35 And the next day he took out two denarii and gave them to the innkeeper, saying, ‘Take care of him, and whatever more you spend, I will repay you when I come back.

Honestly, how many of us would do all this for a stranger? For some of us, we may find it hard to do this for a close relative, yet Christ tells us to go and do likewise. I will be the first one to admit, it is easier said than done, but if Christ demands it then by His strength we can do it! May we like the Good Samaritan first see the image of God in the strangers we meet as opposed to the other barriers that divide us.