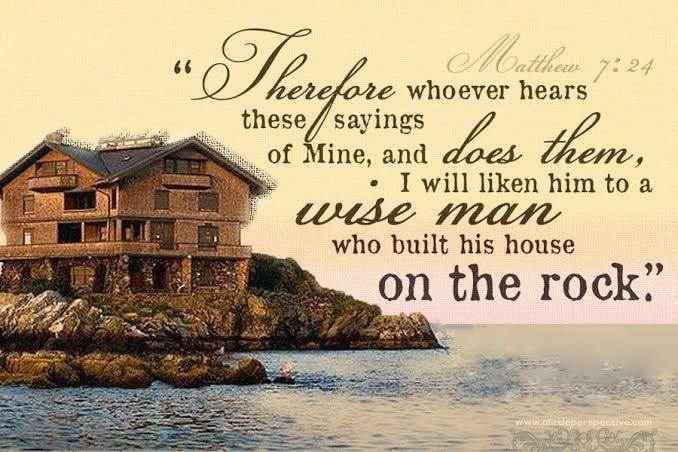 Matthew 7:24-25
24 “Therefore whoever hears these sayings of Mine, and does them, I will liken him to a wise man who built his house on the rock: 25 and the rain descended, the floods came, and the winds blew and beat on that house; and it did not fall, for it was founded on the rock.
Foundations are significant! No one cheers you on when you are building them, but when the storms come they determine whether the house will stand or fall. The wise man heard the words of Jesus and put them into practice. This did not shield him from the rain the wind and the winds, but it was the determining factor on whether the house would be left standing or not. Jesus says this house did not fall, for it was founded on the rock.
The purpose of the wind is to shake everything that can be shaken and only leave those things that are founded on the rock, founded on truth.
I am sure some windows were broken in this house, I am sure some furniture was moved around and some of it was probably broken, but the house remained standing. Just like with Job, he may have lost everything, his property, his children, and his health, he was left standing with the only thing that mattered, his relationship with God remained intact. When you think about it, that was the genesis of this whole saga, to test Job’s faithfulness to God.
It is not about the house, it is what the house was built on. Remember the foolish man had a house as well, he focused so much on the house, but he forgot the foundation, and he ended up losing everything. The wise man invested more in the foundation and not necessarily the house, and when the storm came, it was well worth it!
As we remain anchored on the rock, we may lose some things, but this one thing is for sure, the most important thing remains intact, the things that matter where eternity is concerned remain intact, and that my friend is what counts!
Reflections
Where is your focus, the house, or the foundation?
What is the greatest lesson you are walking away with from this parable?
Do you need to reconsider what you are building your life on? What changes are you willing to make?