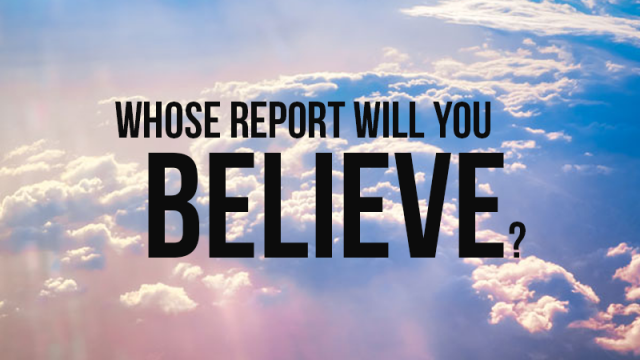 Words have power, in fact the bible does tell us that faith comes by hearing and hearing the word of God. In the same way also doubt and unbelief also comes through what we allow ourselves to hear and believe. I am reminded of the 12 spies who came back but 10 had an evil report filled with fear and the whole nation of Israel chose to believe the fearful report and missed their opportunity to enter their land of promise according to Gods word.
I am reminded of the death and resurrection of Jesus;

Matthew 28:11-15
11 While they were on their way, some of the [Roman] guards went into the city and reported to the chief priests everything that had happened. 12 And when the chief priests had gathered with the elders and had consulted together [to develop a plan of deception], they gave a sufficient sum of money [as a bribe] to the soldiers, 13 and said, “You say this, ‘His disciples came at night and stole Him while we were sleeping.’ 14 And if the governor (Pilate) hears about it, we will calm him down and keep you out of trouble.” 15 So they took the money [they were paid for lying] and did as they were instructed; and this [fabricated] story was widely spread among the Jews, and is to the present day.

Some of us have opened the door for resentment and offence to come into our hearts because of the report we have chosen to believe. Others have allowed fear to take root in their hearts because of the report they have chosen to believe. Just like in the days of Jesus, there are those whose motive is evil and they are spreading lies so as to pull the masses to their side. The reality is, because many of us are emotionally vested in our political sides and we want them to come out on top, we tend to gravitate towards stories that favor them and we do this because in our heart we have to justify our position.

We need to stop and ask ourselves what is the report of the Lord in this matter? Many of us believers invested a lot of time and energy into prayer before we came to this election. What was the word of the Lord? Despite what we see in the natural, that’s the word we need to believe. If we don’t know it then we need to seek Him and find out what His report is.

Whose report will we believe? We shall believe the report of the Lord!