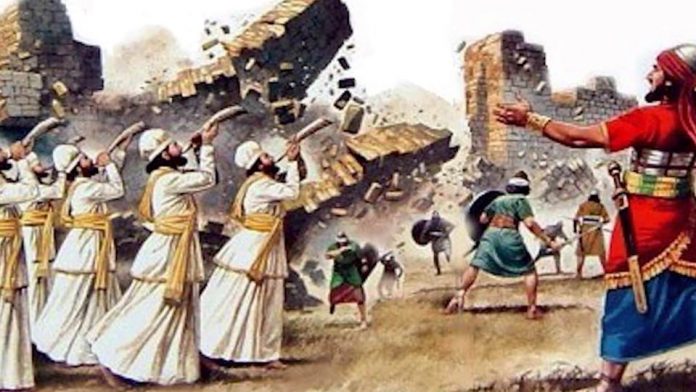 2 Corinthians 10:4-5 (AMP)
4 The weapons of our warfare are not physical [weapons of flesh and blood]. Our weapons are divinely powerful for the destruction of fortresses. 5 We are destroying sophisticated arguments and every exalted and proud thing that sets itself up against the [true] knowledge of God, and we are taking every thought and purpose captive to the obedience of Christ,
If you fail to study your enemy then you will not know the best way to attack him in order to secure a victory. As a believer, one thing we have going for us is that we serve a God who is all knowing and so He knows our enemy and when we rely on Him then He is able to give us a strategy that guarantees us victory over our enemy every time.
Israel was faced with many enemies and every time they had to rely on God for a strategy of how and when to attack the enemy in order to gain victory. Each battle was different and the strategy that worked the last time did not necessarily guarantee a win, in the same way, the next time. One of the most amazing strategies that God gave them is found in Joshua 6 when the walls of Jericho came crashing down. In our human thinking, it seems like the most ridiculous strategy ever and I am sure the inhabitants of Jericho thought the children of Israel were crazy until the walls came crashing down.
Right after that, they come against AI which does not have that many inhabitants and they assume that it will be a walk in the park so they move in their own strength and understanding sending just a few men for this attack and shock on them because they are defeated and they lose 36 men. It is only after Joshua inquires of the Lord then he discovered what went wrong.
As believers, we cannot fight the enemy in our own strength and understanding. We must depend on God and inquire of Him even if it seems like the enemy we are facing is weak like the people of AI. Just because it worked this way the last time does not mean it will work the same way this time, we have to depend on God and not the methods.
We see the same thing with Jesus. When blind Bartemaeus came to Him for healing, Jesus only spoke and the man was healed. At another time we see him spit on the ground make some mud with the saliva then He told the man to go wash in the pool of Siloam. The same problem of blindness it seems but two different strategies to attack it. Remember Jesus said;
John 5:19 (AMP)
19 So Jesus answered them by saying, “I assure you and most solemnly say to you, the Son [a]can do nothing of Himself [of His own accord], unless it is something He sees the Father doing; for whatever things the Father does, the Son [in His turn] also does in the same way.
Even Jesus looked to God the Father for strategy. You and I must learn to always look for God to give us the strategy and timing to attack the enemy because God knows our enemy more than we do.