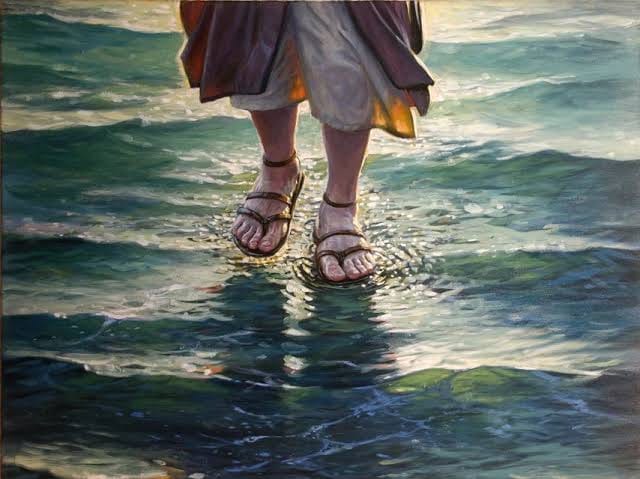 Matthew 14:29-30
So He said, “Come.” And when Peter had come down out of the boat, he walked on the water to go to Jesus. 30 But when he saw [e]that the wind was boisterous, he was afraid; and beginning to sink he cried out, saying, “Lord, save me!”
Peter actually experienced what it is like to walk on water. Many times we focus on the fact that Peter was sinking but before that, he walked on water. How did he do that? He obeyed the words of Jesus! Despite the fact that the winds and waves were still beating hard against the boat, it was still dark but Peter made the choice to walk in obedience to the words of Jesus. He made choice to ignore the winds and the waves and to focus on the words of Jesus.
Think about this, Peter was a fisherman, he was familiar with boats and the water and he knew without any shadow of doubt that you cannot walk on water. If you tried something like that you would sink. Despite that knowledge and experience, Peter did not hesitate jumping on the water simply because the Lord had said come!
How prompt are we when it comes to obedience to the word of God especially if it goes against everything we know or have experienced? Do we try and reason it out or do we jump on it like Peter did?
Something very interesting happens to Peter when he shifts his attention from Jesus to the wind and waves. The bible says that he begun sinking. Think about this, we have two scenarios here and you get to choose which of the two will be your reality. Jesus said ” Be of good cheer, it is I, do not fear!” When Peter jumped out of the boat, he was not afraid, he had let go of fear and embraced faith because faith comes by hearing and hearing the word of the Lord. Faith connected him to Jesus and what he had said and walking on water became the reality that he was living in. As soon as he allowed fear to take him over because the bible says that when he saw that the wind was boisterous he was afraid, he let go of faith and sinking became his reality.
Both realities were available to him and whatever he chose between faith and fear determined what reality he experienced. The same applies to us today!
The story did not end there because when Peter realized that he was sinking, he cried out to the Lord to save him and the Lord did just that.
This is a great reminder that even in our moments of weakness he will never abandon us, he is always right here with us!
Reflections.
What is the word of faith from the Lord that you are currently standing on?
Have you ever experienced a sinking moment like Peter because you shifted from faith to fear? what happened?
Peter knew who to cry out to when he began sinking! Is Jesus the first person you cry out to when you are sinking or is he always the last option that you run to?