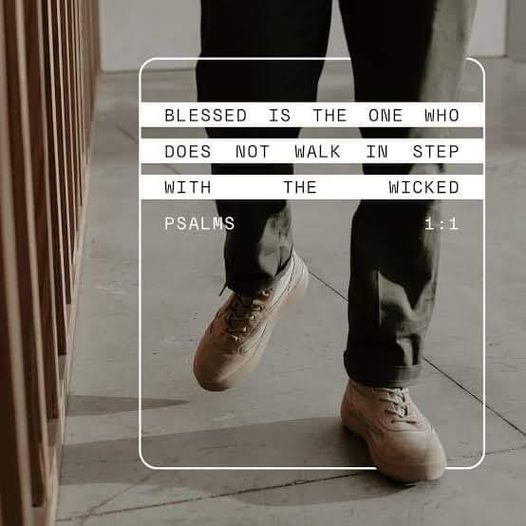 Psalms 1:1 NKJV
Blessed is the man Who walks not in the counsel of the ungodly, Nor stands in the path of sinners, Nor sits in the seat of the scornful;
The word blessed means a man or woman who is right or straight with God. This is someone who is content, happy and fulfilled. Unlike what many think today, this is a blessedness that is not based on material things, but rather something higher that stems from the inside and is not affected by the lack of or presence of what’s on the outside. It is a state of being as seen in the life of Joseph in the pit, Portiphas house the prison or the palace. His environment did not influence his state of being blessed. No matter where he was, what he did was blessed because the blessing flowed from him into what he did.
Certain things are missing from the life of this blessed individual that are worth noting. He is careful who he walks with, who he stands with and who he sits with.
We can say it this way, his Thinking, Behaving and Belonging are things he guards carefully not allowing the influence of the ungodly in these three areas of his life.
He does not walk in the counsel of the ungodly meaning he knows how to discern, he can distinguish between godly and ungodly counsel. Counsel is advice and direction in life that relates to purpose.
He does not stand in the path of sinners. There is a path along which sinners walk, and this man is careful enough to know it and not stand along it because he knows that if he does, soon enough he will start to walk along the same path. Reminds me of the young man in proverbs 7 who hangs around the house of the harlot, and soon enough he yields to her enticing speech.
He does not sit in the sit of the scornful. The scornful are those who are arrogant and love to criticize. This is so rampant today even among believers but one who is right with God understands that this is not the company they should keep because if they do, soon enough they will be defiled and their hearts will be filled with bitterness and offense.
Who you walk with will influence how you think. Whose path you stand along will determine how you behave, and whoever you sit with will determine your sense of belonging.
Reflections.
Are you blessed? What does being blessed look like to you?
Who are your close companions, who do you walk with?
From where do you derive your sense of belonging?