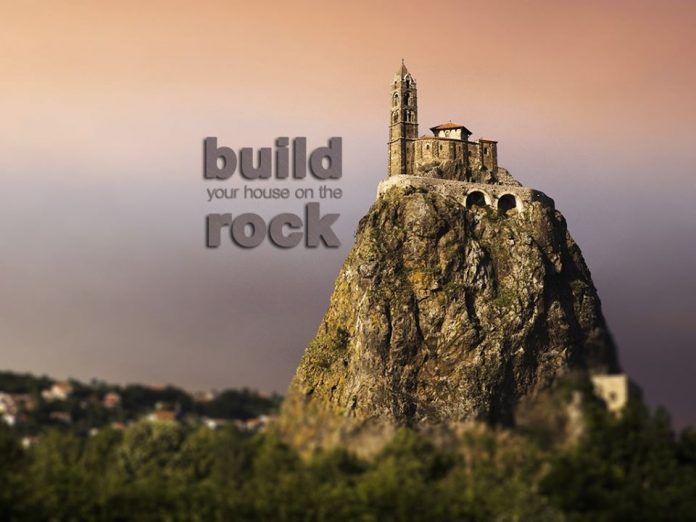 Matthew 7:24 NKJV
24 “Therefore whoever hears these sayings of Mine, and does them, I will liken him to a wise man who built his house on the rock:

Jesus talks about two kinds of builders, a wise one and a foolish one. The thing you and I have to recognize is that we are all builders and we fit into one of the two categories that Jesus talks about. You are either a foolish builder or a wise builder. The way we live our life, the decisions we make are all influenced by something.

Jesus tells us that a wise builder is one who allows his life to be influenced and guided by his words. Those who hear His words and go on to do what He says is wise, a wise man building his house on the rock. This tells me that His words are the rock that is unshakable!
We must be keen enough to hear his word but hearing alone is not enough! We must follow up on his words and do as He says. In fact Jesus said that if we love Him then we will obey his commands, that’s how we prove that we love him.
The foolish builder on the other hand is one who hears this word but instead thinking they know better go on to do contrary to what the word says.

The thing to note is that when the building is going on, you may not be able to tell who the foolish builder is and who the wise one is. Most likely you may look at the foolish builder and make an assumption that he is the wiser one because his building may come up quicker than the one who has to toil to secure his foundation on the rock below.
When both houses are completed you may not tell which one is built on the sand and which one is on the rock because the foundations are underneath and many times no one bothers with them.
It is until the storms come, then the foolish builder is revealed for all to see because his house will come tumbling down, having nothing to secure it.
The word is the sure foundation that we have been given to build our lives on, the question is, are we diligent enough to study and do as it says or would we rather take a shortcut?