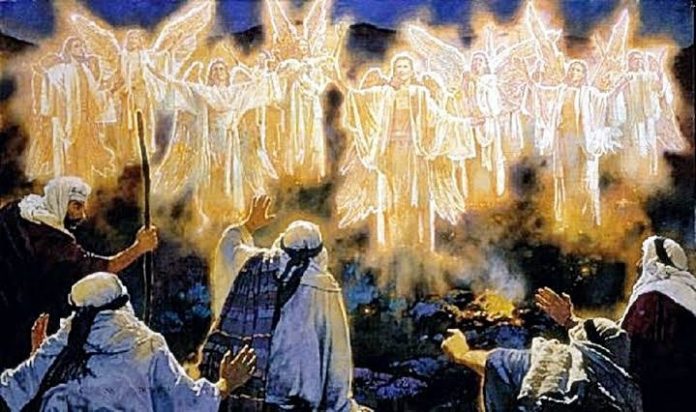 Luke 2:13-14
13 And suddenly there was with the angel a multitude of the heavenly host praising God and saying:
14 “Glory to God in the highest, And on earth peace, goodwill[e] toward men!”
I cannot imagine what it must have been like for the shepherds out in the field on the night that a heavenly host appeared to them and sang. I mean, who else has ever been the audience to a choir of angels singing? How did they sound like? How loud were they? Did other people see and hear them?
The angels song is short compared to the other songs around the Christmas story. The song is only one line but the message is huge.
Three promises are mentioned in this song;
Glory to God in the highest
Peace on earth
Goodwill to all men.
The first one is easy to believe because none of us have been to the highest realm of heaven but we believe that God is glorified forever in that realm. The following two are what we still have an issue with till today more that 2000 years after Christ was nailed to a cross. Where is this peace on earth and this goodwill to all men?
If there is one thing that has been so elusive throughout generations is peace on earth. If Jesus came to bring peace, why do we still have so many wars in the world? Jesus said;
John 14:27 NKJV
27 Peace I leave with you, My peace I give to you; not as the world gives do I give to you. Let not your heart be troubled, neither let it be afraid.
The peace that Jesus brings is so different from the peace the world is looking for and offers. This is a peace that surpasses all human understanding because it comes from within our hearts and it comes one heart at a time. The reason the world is yet to experience this peace is because of the condition of their hearts.
What about goodwill to all men, where is that? Good will means delight, satisfaction or kind intent. When you look around the world with all the evil thriving, you wonder where this good will is. The most famous verse in the bible reminds us of this good will and how to access.
John 3:16 NKJV
16 For God so loved the world that He gave His only begotten Son, that whoever believes in Him should not perish but have everlasting life.
Eternal life is the goodwill talked about, it is what we get instead of the death we deserve. Although it is accessible to all, it is only received by whosoever believes in Christ and what he did for us on the cross at Calvary.
So yes, Glory to God in the highest, Peace on earth Goodwill to all men.
MERRY CHRISTMAS!