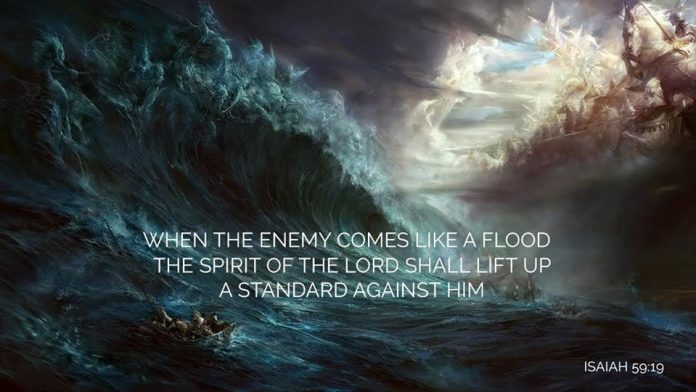 1 Samuel 17:34-37
34 But David said to Saul, “Your servant has been keeping his father’s sheep. When a lion or a bear came and carried off a sheep from the flock, 35 I went after it, struck it and rescued the sheep from its mouth. When it turned on me, I seized it by its hair, struck it and killed it.36 Your servant has killed both the lion and the bear; this uncircumcised Philistine will be like one of them because he has defied the armies of the living God. 37 The LORD who rescued me from the paw of the lion and the paw of the bear will rescue me from the hand of this Philistine.”

David was just a teenager when he came face to face with Goliath. According to the book of Numbers 1:3, only those men who were 20 years and above were allowed to go to war and the fact that David was not part of the army and only his three oldest brothers were at war indicated that him being the last born of eight then he must have been a teenager.

What he tells King Saul is very intriguing, that though he was a teenager, he already had fought some battles when no one was looking and he came out victorious. As a teen, he had fought off a lion and a bear when they try to snatch some of the sheep that he was taking care of and he had killed them. One thing that I love is that he does not attribute the victory to his own ability but rather he says,” The LORD who rescued me from the paw of the lion and the paw of the bear will rescue me from the hand of this Philistine.”

Isaiah 59:19b
When the enemy shall come in like a flood, the Spirit of the LORD shall lift up a standard against him.

As long as David depended on God, no matter how the enemy came in like a flood, the Lord always raised up a standard against him. Based on his previous experiences David was sure that God would give him the victory this time as before.
One interesting thing is that Saul tries to get David to go to battle in his armor. This is the king’s armor and remember David had already been anointed as king. That would seem cool right? To fight in the king’s armor but just as we learned yesterday, we must get the strategy from God and not lean on our own understanding. God’s strategy for David to defeat Goliath was a sling and a stone.

Even as Jesus told the disciples, “These kind cannot come out except by prayer and fasting.” When the enemy comes in like a flood, then God raises up a standard against him and God gives us a new strategy to defeat the enemy meaning we have to maintain communication to download the new strategy.