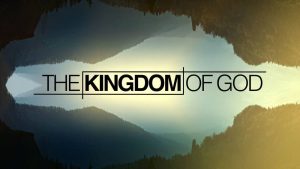 Matthew 3:1-2
In those days [a]John the Baptist appeared, preaching in the Wilderness of Judea [along the western side of the Dead Sea] and saying, 2 “[b]Repent [change your inner self—your old way of thinking, regret past sins, live your life in a way that proves repentance; seek God’s purpose for your life], for the kingdom of heaven is at hand.”

John the Baptist as we call him came to prepare the way for Jesus and his message was that the kingdom of God is at hand, meaning that it was near. Jesus then comes on the scene and he also has a kingdom message. His message is a progression of the message that John has been preaching for Jesus says, “The kingdom of God is here!” but what is this kingdom? I am very sure that the people of his time understood what kingdom meant, because in their days they had kingdoms.
We could define Gods kingdom as “the rule and reign of God, the expression of his gracious sovereign will. To belong to the kingdom of God is to belong to the people among whom the reign of God has already begun.”

Two things I want to mention;
First, I think sometimes we miss it because we get born again and we define ourselves more with our denomination and not Gods kingdom. When we get born again we are translated from the kingdom of darkness into the kingdom of God. This kingdom has a constitution and a way of life, it has a culture. Problem is many don’t read the constitution and thus we have no idea what the culture of the kingdom is. We end up bowing down more to our denominations and those who lead them than to the King in the kingdom.

Secondly, for some reason we sometimes have the notion that when we die and go to heaven then we will enter the Kingdom of God. Jesus said the kingdom of God is here…NOW! When we get born again we become part of the kingdom. Its not something that God has saved up for us for later, it is something we are a part of now. We should be living on earth as though we were in heaven. Our way of life, our culture the way we interact with each other should be how it is done in heaven. Thy will be done on earth as it is in heaven, why? Because we are here on earth but we are part of the kingdom of heaven.

Romans 12:2 (NKJV)
2 And do not be conformed to this world, but be transformed by the renewing of your mind, that you may prove what is that good and acceptable and perfect will of God.

This world is a different kingdom.
May we understand that we are part of Gods kingdom and start living according to the constitution of this kingdom then we will experience all the benefits available to kingdom inhabitants?