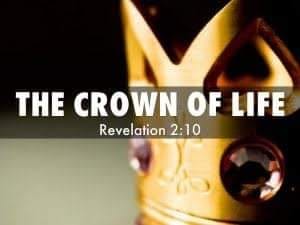 James 1:12 NKJV
12 Blessed is the man who endures temptation; for when he has been approved, he will receive the crown of life which the Lord has promised to those who love Him.
Revelation 2:10 NKJV
10 Do not fear any of those things which you are about to suffer. Indeed, the devil is about to throw some of you into prison, that you may be tested, and you will have tribulation ten days. Be faithful until death, and I will give you the crown of life.
We all get tempted and temptation in itself is not sinning because Jesus was without sin yet he was tempted. How you respond to the temptation is the issue. James tells us that those who endure temptation and hardship will receive the crown of life. This crown and eternal life are not the same thing. As we know, eternal life cannot be earned, it is a gift given to those who believe in the Lord Jesus Christ, and its got nothing to do with our works
Ephesians 2:8-9
8 For by grace you have been saved through faith, and that not of yourselves; it is the gift of God, 9 not of works, lest anyone should boast.
This crown is a reward, a badge of honor for those who have served God faithfully. The crown that James mentions is the same crown that is mentioned by Jesus in the book of Revelation. Jesus warns the Christians in the church at Smyrna not to be afraid of any of the things the devil is about to put them through. Being thrown in prison and suffering days of tribulation. Jesus encourages them to remain faithful until death and he will give them the crown of life.
When you look at all the churches that Jesus speaks to in the book of revelation, he promises rewards for those who endure to the end.
Like Job of old, I pray that you and I will endure all kinds of hardships and suffering and hold on to the faith, keep running the race and not cave in. Like Saul who had to go through all sorts of trials and persecution yet he kept running his race, he remained focused on his assignment, may you and I be found faithful May we hear him say to us on that day, welcome home thou good and faithful servant!
Reflections
What is the greatest temptation you always have to fight in running your race?
Are you victorious over it or does it always get the best of you?
When you think about the persecution that Paul and the Apostles had to endure and still run their race compared to what you are facing in your race, what thoughts go through your mind?