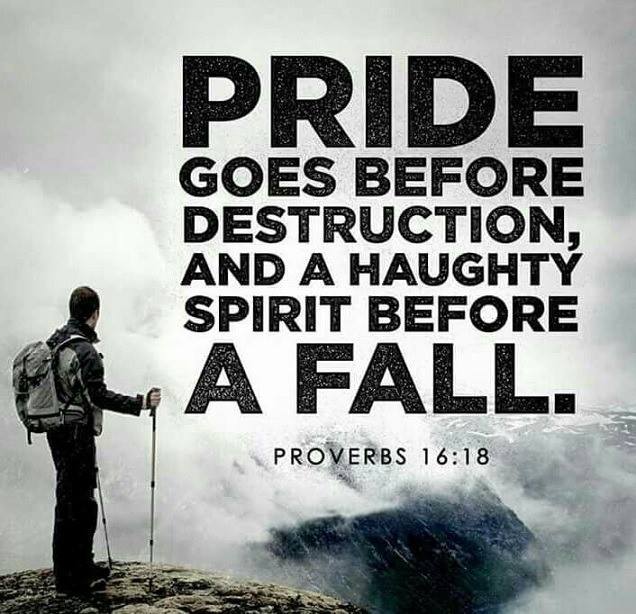 Obadiah 1:3
“The pride and arrogance of your heart have deceived you,
You who live in the clefts and lofty security of the rock (Sela),
Whose dwelling place is high,
Who say [boastfully] in your heart,
‘Who will bring me down to earth?’

Pride has a goal and that is to preserve self to promote and elevate it. Pride seeks to protect self at all costs robbing God of the glory that belongs to Him. Pride will resist submission and instruction and that’s where the deception creeps in.
Pride people are blind people. They are blind to the truth because the promotion of self is so huge in their life it cannot allow them to even think or imagine that they may be wrong or that someone else could actually be right . When you are proud then you will be blinded to the truth because pride has only one agenda and that is to promote self and nothing else. The elevation of self then leads to rebellion because then you will not accept or even entertain the thought that you may be wrong, in your eyes you are better than everybody else and thus you will not be willing to receive instruction or correction. As long as pride takes center stage, there can be no room for truth to settle in.

This reminds me of the tale “”The Emperor’s New Clothes” a short tale written by Danish author Hans Christian Andersen. This is a tale about a proud king who loved showing off his clothes and two weavers who took him for a ride. The two weavers promised the emperor a new suit of clothes that they said was invisible to those who are unfit for their positions, stupid, or incompetent. When the emperor parades before his subjects in his new clothes, no one dares to say that he is naked for fear that they will be seen as “unfit for their positions, stupid, or incompetent”. Finally, a child cries out, “But he isn’t wearing anything at all!”

That’s the deception of pride, are you like the Emperor walking around naked because you have been blinded and deceived by pride? Humble yourself and allow God to cloth you in his truth.