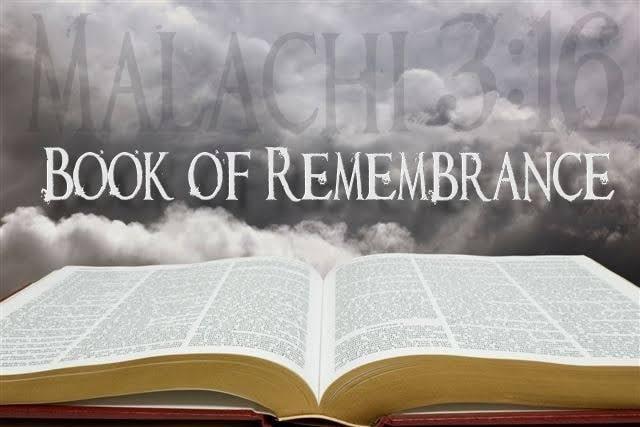 Malachi 3:16 NKJV
16 Then those who feared the LORD spoke to one another,
And the LORD listened and heard them; So a book of remembrance was written before Him
For those who fear the LORD And who [a]meditate on His name.

Back in the day when I was a kid, it was very common that when you visited someone, they would always pull out the family photo album and they would show you pictures of their memories and happy times as a family. Though that does not happen a lot nowadays, a form of it still happens on social media platforms where we are continually posting pictures that tell our stories. These are memories we all want to remember and we love sharing with friends and family, and strangers alike.
Do you know that there are book is heaven? Many of us are familiar with the book of life but did you know that there is a book of remembrance? Now God does not need a book to remember because he knows everything but this is a metaphor used to help us gain a clearer understanding that what we do for God is never in vain. Back in the book of Esther we see such a book;

Esther 6:1-3 NKJV
6 That night [a]the king could not sleep. So one was commanded to bring the book of the records of the chronicles; and they were read before the king. 2 And it was found written that Mordecai had told of [b]Bigthana and Teresh, two of the king’s eunuchs, the doorkeepers who had sought to lay hands on King Ahasuerus. 3 Then the king said, “What honor or dignity has been bestowed on Mordecai for this?” And the king’s servants who attended him said, “Nothing has been done for him.”

Sometimes we feel like Mordecai having done the right thing and stood for what is right but it seems like God has forgotten and no one took notice. Well I want to encourage you by reminding you that we serve a just God who does not forget. He has a book of remembrance and all your labor in the Lord will not go unrewarded.
Listen to what the writer of Hebrews tells us;

Hebrews 6:10 NKJV
10 For God is not unjust to forget your work and [a]labor of love which you have shown toward His name, in that you have ministered to the saints, and do minister.

Whatever you do for the Lord no matter how small, He takes note of it and He will reward you, remember no one is able to reward as the Lord does.

Matthew 10:42 NKJV
And whoever gives one of these little ones only a cup of cold water in the name of a disciple, assuredly, I say to you, he shall by no means lose his reward.”

Keep the faith alive, do the right thing always because though others may not take note, in heaven there is a record of all your deeds and the just God that we serve, he will reward you.