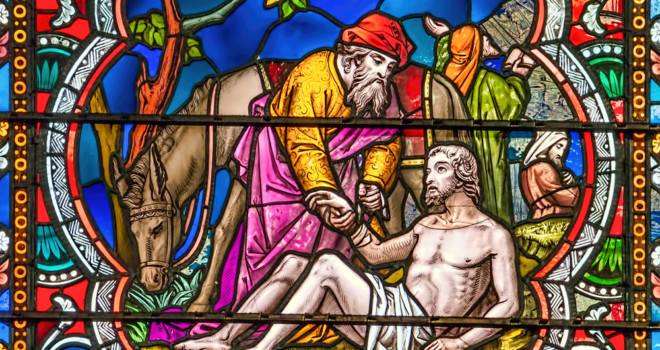 Luke 10:30-35
30 Jesus replied, “A man was going down from Jerusalem to Jericho, and he encountered robbers, who stripped him of his clothes [and belongings], beat him, and went their way [unconcerned], leaving him half dead. 31 Now by coincidence a priest was going down that road, and when he saw him, he passed by on the other side. 32 Likewise a Levite also came down to the place and saw him, and passed by on the other side [of the road]. 33 But a Samaritan (foreigner), who was traveling, came upon him; and when he saw him, he was deeply moved with compassion [for him], 34 and went to him and bandaged up his wounds, pouring oil and wine on them [to sooth and disinfect the injuries]; and he put him on his own pack-animal, and brought him to an inn and took care of him. 35 On the next day he took out two denarii (two days’ wages) and gave them to the innkeeper, and said, ‘Take care of him; and whatever more you spend, I will repay you when I return.

I often wonder what was going on in the mind of this man after he was attacked by the robbers. I can see him there, half dead making a prayer to the Lord saying;

“Lord have mercy on me and send me an angel to help me for if I get no help I will surely die.”

As he lays there he faintly hears what seem to be the footsteps of someone walking towards him in a hurry. Straining to see through his swollen eyes, he sees the hazy figure of what appears to be a priest and in his heart he begins to thank the Lord for answering his prayer. The footsteps slow down and then suddenly they speed up again as though someone is getting away in haste. To his disappointment the priest walks away leaving him to die.

Shortly but after what seems like ages, the man hears another set of footsteps approaching him. He again manages to peep through his swollen eyes and to his joy he makes out what appears to be like the figure of a Levite approaching him. He thanks the Lord in his heart and thinks surely this is help sent from the Lord but once again to his disappointment; the Levite walks away in a hurry as though he is late for some important function. In fact he walks on the other side of the road.

The man has lost all hope and slowly his strength is drifting away and he seems to be fading off into another world as death beacons him to come. The sound of a donkey briefly brings him back into consciousness and he is able to make out someone on a donkey approaching him. All his hopes are dashed as he makes out the figure of the man on the donkey and he appears to be a Samaritan and slowly he fades off into the darkness.
When he comes too, he finds himself in a room and his wounds are bandaged and a ready meal by his side. A man walks into the room and says:

“It’s good to have you back in the land of the living. For a moment there you had me worried.”
The injured man asks “Who are you and where am I?
“You are at my inn” says the stranger “You were brought here late last night by a Samaritan man; apparently you were robbed beaten and left for dead. The Samaritan who brought you here had to leave early in the morning but he said he would be back to check on you and ensure that you are ok.”

The injured man mutters something to himself in shock that it was not the priest or the Levite but the Samaritan who was his miracle. Surely God works in ways that we cannot understand for the person he considered an enemy was his angel in disguise.

All around us, there are people robbed and battered and left for dead. Will you be like the priest and Levite and pass them by or will you be like the Good Samaritan and use up your resources to be their miracle, their angel in disguise?

The choice is yours to make!