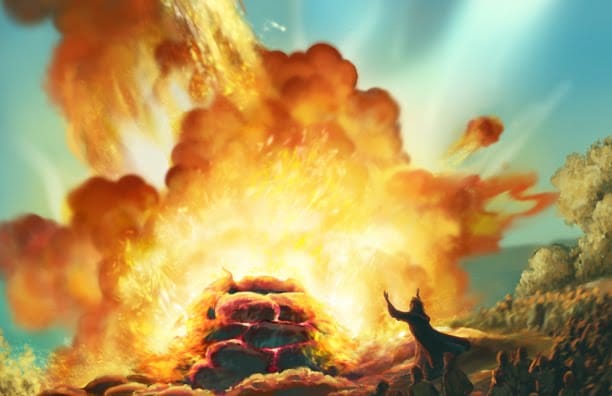 1 Kings 18:38
38 Then the fire of the Lord fell and consumed the burnt sacrifice, and the wood and the stones and the dust, and it licked up the water that was in the trench.
Aside from the Red Sea parting and the children of Israel crossing on dry ground, I think the spectacle on Mt Carmel has to be the other. Can you imagine the look on the peoples faces when the fire came down from heaven and consumed everything? Take note that the prophets of Baal had been in prayer the whole morning and nothing had happened. Here comes Elijah, and he makes a very short prayer and God answers by fire.
This contest was to prove who was the true God. The most important thing about the fire coming down from heaven is that God spoke, and in capital letter did he speak.
God proved to everyone who was present that he was God, he was alive, he was in heaven, and that Elijah was his servant and he, God, had spoken to him.
I am also reminded that in the book of Acts when they all in the upper room in one accord, there suddenly appeared tongues of fire that settled on each of them and they began to speak in tongues. Remember also in the book of Exodus, Moses saw a bush that was on fire, but it was not being consumed.
Fire represents the presence of God. This fire came and specifically consumed the sacrifice and the altar, indicating that God had accepted the sacrifice that had been offered to him.
Elijah prayed and said; Hear me, O Lord, hear me, that this people may know that You are the Lord God, and that You have turned their hearts back to You again. This means that the fire was also a sign for the people of Israel that God had turned their hearts back to him.
May the fire and passion for God burn in our hearts. May we being living sacrifices holy and acceptable before him that we may attract the fire of God always wherever we are.