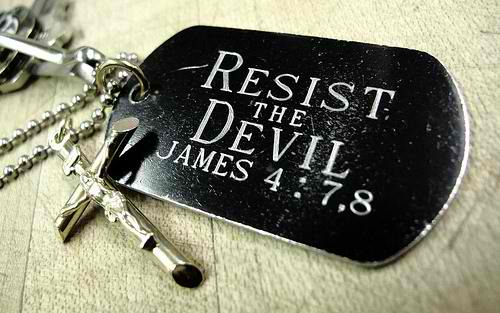 James 4:7-8
“Submit yourselves, then, to God. Resist the devil, and he will flee from you. Come near to God and he will come near to you. Wash your hands, you sinners, and purify your hearts, you double-minded.”

Most Christians are clueless about the spiritual warfare that goes on in the heavenlies. They are surprised when they come under attack. In their mind, good people should be left alone, and only those who are really bad should have to deal with demons. James is very clear that we should resist the devil. He comes at you through temptation when you least expect it.

Resist the Devil
The devil prowls around like a lion looking for who he can devour. If you’ve watched animal shows like Planet Earth, lions are into surprise attacks. They slowly and silently creep up on their prey and then pounce at the opportune moment. Satan works in the same way. He makes sure you can’t see him before he makes his move.

Fight the Flesh
There is a battle raging inside every believer, the battle of the flesh and the spirit. The flesh wants to satisfy every physical desire. It is never satisfied because it always thinks of the next object of its desire. The Spirit longs to satisfy God. He desires to be obedient to the Word and serve in a manner worthy of our calling. The flesh is temporal, while the spirit is eternal. That’s why the battle is so fierce. People think the eternal can always be put off while the temporal needs fulfillment right now. Fulfilling the flesh may produce momentary satisfaction, but the longing returns greater than before. Satisfying the spirit brings peace and contentment. Understand the battle that is raging inside of you.

Winning the Battle
So how do you win this battle? First, remember that this is all done through the power of the Holy Spirit. You can’t win this by your willpower. Submit yourself to His power and guidance. James tells you to resist the devil through the Spirit, and he will flee from you. This happens by fleeing temptation, casting your burden upon the Lord, and speaking God’s Word in the midst of spiritual warfare. You also need to keep your eyes focused on the Lord. Draw near to Him. Colossians 3 tells you to set your mind on things above. Stop focusing on the temptation or sin. If you have fallen into sin, confess your sins and repent. Let the Lord’s grace cleanse you from it.