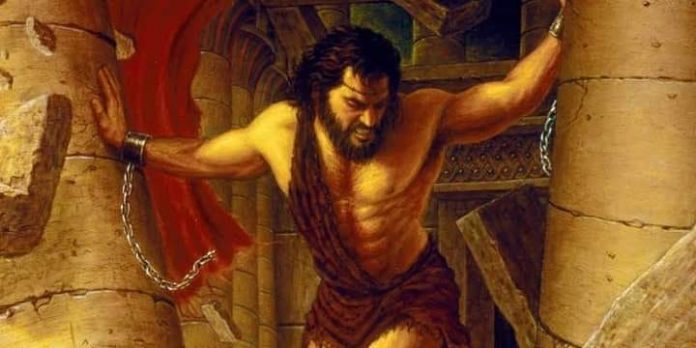 Judges 16:21‭-‬22 NKJV
Then the Philistines took him and put out his eyes, and brought him down to Gaza. They bound him with bronze fetters, and he became a grinder in the prison. However, the hair of his head began to grow again after it had been shaven.
Samson was a man of great strength through the anointing that came from God. He was a great Judge in Israel and he brought great terror to the Philistines, the enemies of God and Israel.
Samson tore a lion apart with his bare hands. He unplucked the city gates with its foundation and carried them off on his shoulders. With only the jawbone of a donkey, he slew 1000 men.
All this was because from birth he was set apart for God. He was a Nazarite.
He was not to touch wine or any strong drink. He was not to shave his hair and he was not to touch or be near a dead body. He was to be separated unto God just as in the new testament Paul urges us to be separate from the world.
II Corinthians 6:17‭-‬18 NKJV
Therefore “Come out from among them And be separate, says the Lord. Do not touch what is unclean, And I will receive you.” “I will be a Father to you, And you shall be My sons and daughters, Says the Lord Almighty.”
Samson toyed around with sin. Though he was called to be separate from birth, he kept pushing the boundaries toying with sin and he forgot that his separation and dedication to God was the source of his power.
Maybe in 2021 that was you, toying around with sin and eventually finding yourself at a place where the favor and anointing of God had left you. It seems like God is so disappointed with you and he wants nothing more to do with you. That’s a lie and nothing could be further from the truth.
I John 1:9 NKJV
If we confess our sins, He is faithful and just to forgive us our sins and to cleanse us from all unrighteousness.
Just like Samson, your hair will grow again. God can still use you. Samson recognized his error and he cried out to God to use him one more time. Though he was blind and still bound, he was not bald. He reconnected with God and that same anointing that he had before, God gave it to him one more time. The Bible says;
Judges 16:30 NKJV
Then Samson said, “Let me die with the Philistines!” And he pushed with all his might, and the temple fell on the Lords and all the people who were in it. So the dead that he killed at his death were more than he had killed in his life.
Brace yourself for 2022, God can use you to do more than you have ever done before.
Reflections
Which area of your life has been the most difficult to keep yourself separated?
How has this affected your walk with God and his call over your life?
What must you do for God to use you? How can your hair grow again?