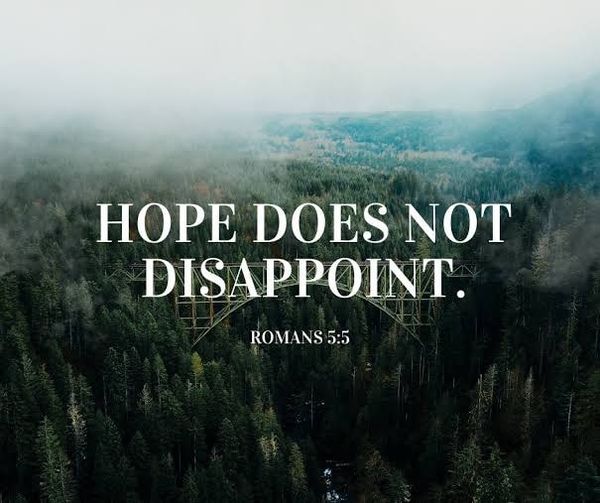 Romans 5:3-5 NKJV
3 And not only that, but we also glory in tribulations, knowing that tribulation produces [a]perseverance; 4 and perseverance, [b]character; and character, hope. 5 Now hope does not disappoint, because the love of God has been poured out in our hearts by the Holy Spirit who was given to us.
Our key scripture clearly lays out a sequence to explain to us the purpose why we go through suffering as believers. Suffering produces endurance which leads to strong character which brings forth hope, and that hope does not disappoint.
Numbers 23:19 NKJV
19 “God is not a man, that He should lie, Nor a son of man, that He should repent.
Has He said, and will He not do? Or has He spoken, and will He not make it good?
This scripture tells us why hope does not disappoint. God is faithful to do what he has promised to do. If he promised it, then it will be done, no matter what the circumstances look like in the natural.
If hope does not diss-appoint, then hope appoints. Other bible versions say that hope does not put to shame. This means to embarrass publicly. The opposite of that would be to honour.
There is no one in the Bible who put their hope in God, and they ended up being disappointed.
Joseph was not put to shame, he was promoted
Job was not put to shame, all he lost was restored…. Double
Abraham was not put to shame, from him God birthed a nation
David was not put to shame, his descendant will sit on the throne forever
Jesus was not put to shame, he has been given the name that is above all names.
All who hope in the Lord, as they hold on to their faith through the trials and tribulations of life, will not be disappointed. The love of God has been poured into our hearts by the Holy Spirit who has sealed us and is a reminder that what God promised he will deliver. Amen.
Reflections
What promise from God are you hoping for and waiting to see its manifestation?
What has God promised and done in your life, his long did you have to wait?