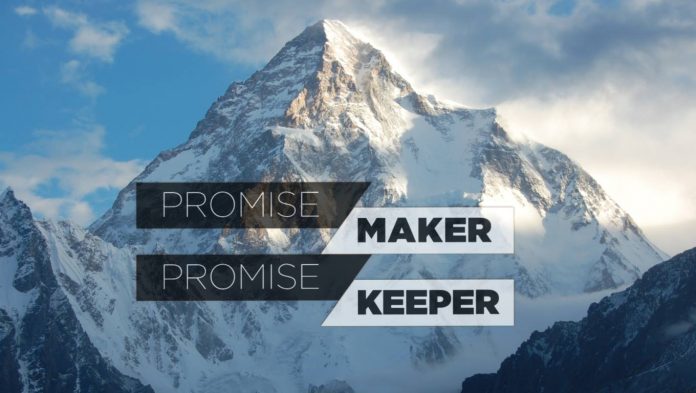 We have all been there, making a promise and then forgetting to fulfill it. As humans, we are so forgetful that even though at the time of making the promise we mean well, sometimes we get so engrossed and overwhelmed with the issues of life we forget to fulfill the promise we made. Reminds me of the parents who returned home to their children, whom they had left with the babysitter. They were pleasantly surprised to find the kids fast asleep. When the sitter had been paid-just as she was walking out the door-she communicated this detail: “Oops-almost forgot to tell you. I promised Sammy that if he would stay in bed, you would get him a pony in the morning.”
God is not like that, He does not lie so as to manipulate us; He keeps His promises.

Isaiah 7:14 (NLT)
14 All right then, the Lord himself will give you the sign. Look! The virgin[a] will conceive a child! She will give birth to a son and will call him Immanuel (which means ‘God is with us’).

Christmas is just around the corner and usually, the world over it is a season filled with lots of festivities, in fact, we call it the festive season. In the midst of all the food and celebration, we sometimes forget what we are celebrating about. One thing that Christmas should remind us is the faithfulness of God.
Long before Christ was born; God spoke through His servants who prophesied His birth. Even long before that at the very beginning when Adam and Eve sinned in the garden, God himself made a promise when He declared

Genesis 3:15 (NLT)
15 And I will cause hostility between you and the woman, and between your offspring and her offspring. He will strike[a] your head, and you will strike his heel.”

The word of God is filled with many promises that are addressed to us if only we will believe what God has declared and claimed it over our lives. God is not a man that He should lie, if He speaks it, He is well able to make good on it. A man may let us down and sometimes because of being through such situations we project them to our relationship with God and we find it hard to trust in Him. As we think of Christmas and the joy it brings in its season every year, may we be reminded to remain faithful trusting in God and claiming His promises over our lives because He is a promise-keeping God.