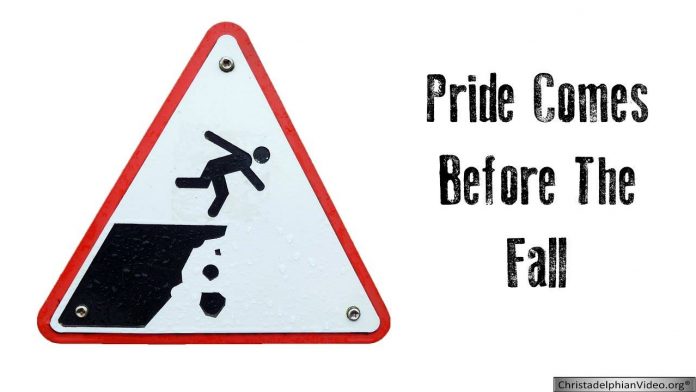 During the Battle of Spotsylvania in the Civil War, Union general John Sedgwick was inspecting his troops. At one point he came to a parapet, over which he gazed out in the direction of the enemy. His officers suggested that this was unwise and perhaps he ought to duck while passing the parapet. “Nonsense,” snapped the general. “They couldn’t hit an elephant at this distan…..” As the words left his mouth, Sedgwick fell to the ground, mortally wounded.

Proverbs 16:18 (AMP)
18 Pride goes before destruction and a haughty spirit before a fall.

This must be one of the proverbs I learned from a very early age even before I started going to church. Over and over again I have witnessed pride and arrogance brings down men and even organizations. Pride leads to destruction because once you allow pride in your heart then you have no room for counsel from anyone else not even God. This is because pride sees itself as being better than everyone else. It is exalting yourself more than you really are and in doing so you rely on self and we all know that can only take you so far because we are all limited in one way or the other.

I am reminded of Naaman the great general who was almost destroyed by leprosy because he was a proud man.

2 Kings 5:11-12
11 But Naaman was furious and went away and said, “Indeed! I thought ‘He would at least come out to [see] me and stand and call on the name of the LORDhis God, and wave his hand over the place [of leprosy] and heal the leper.’ 12 Are not Abana and Pharpar, the rivers of Damascus [in Aram], better than all the waters of Israel? Could I not wash in them and be clean?” So he turned and went away in a rage.

Pride almost brought him to a place of destruction fortunately he humbled himself to heed to the counsel of his servants yet he was a great general. Sometimes we are too proud to receive counsel from those we think to be lower than us, we think we know more than they do and there is nothing they can say that can add value to our life.
Pride will pave way for destruction. When it comes to relating with others heed the counsel from Paul in

Philippians 2:3-4
3 Do nothing from selfishness or empty conceit [through factional motives, or strife], but with [an attitude of] humility [being neither arrogant nor self-righteous], regard others as more important than yourselves.