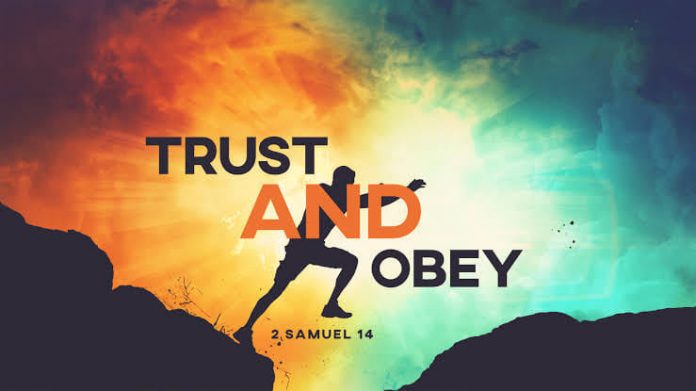 1 Samuel 15:22-24 NKJV
“So Samuel said: “Has the Lord as great delight in burnt offerings and sacrifices, As in obeying the voice of the Lord? Behold, to obey is better than sacrifice, And to heed than the fat of rams. For rebellion is as the sin of [a]witchcraft,
And stubbornness is as iniquity and idolatry.”
A Christian is one who displays the character of obedience to the word of God. Obedience not because it makes sense or because its easy, but simply because it is what the Lord has said. As the song says, “Trust and obey, for there is no other way to be happy in Jesus but to trust and obey!”
Where there is no trust, then obedience becomes hard. For many Christians, we struggle to obey not because we out rightly want to walk in disobedience but simply because we do not know the Lord well enough and thus we struggle in the area of trust.
Proverbs 3:5-6 “Trust in the Lord with all your heart, And lean not on your own understanding; In all your ways acknowledge Him, And He shall [b]direct your paths.”
When we trust God then we are well assured that he will direct our path meaning we are assured of victory each time. To not walk in obedience means then that we are walking in rebellion. God equates this to the sin of witchcraft. To rebel against God is to declare that you know better, it is to declare that God is a liar who does not fulfill that which he has promised.
When we look at the great women and men of God in the bible, all of them walked in obedience to the direction and word of God. This is a mark of a true disciple of Christ.
The children of Israel journeyed in the wilderness for 40 years because of lack of obedience. They did not trust the Lord enough to fully walk in obedience and this delayed them from entering into the promised land. In fact, a whole generation never entered in.
Jesus declared that anyone who claims to love him, will walk in obedience to his word. We can’t claim to love him when we live contrary to his word, meaning we have to know this word so as to walk in obedience meaning we must love the word!
James 1:22-25 “But be doers of the word, and not hearers only, deceiving yourselves. For if anyone is a hearer of the word and not a doer, he is like a man observing his natural face in a mirror; for he observes himself, goes away, and immediately forgets what kind of man he was. But he who looks into the perfect law of liberty and continues in it, and is not a forgetful hearer but a doer of the work, this one will be blessed in what he does.”
What is the last thing God told you (Through his word or a sermon) and what have you done about it? Are you walking in obedience or rebellion?
What are some portions of the Bible that you really struggle to walk in obedience to? Do you struggle when it comes to trusting God with the affairs of your life?