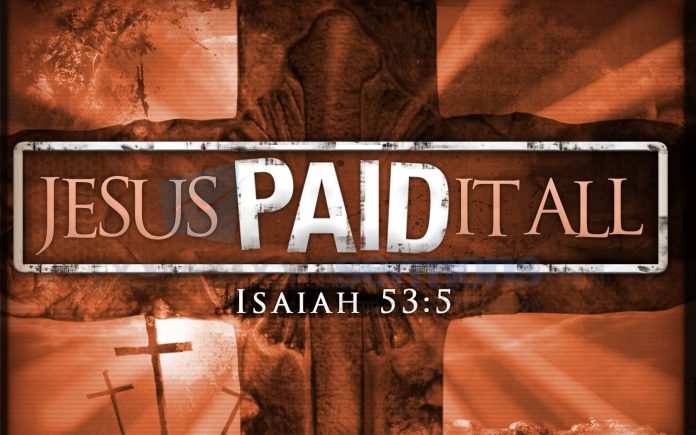 It is finished!
Have you ever witnessed the start of a marathon race? Usually the crowds are huge and there is lots of excitement. Off the gun goes and the sea of humanity begin the race. Interestingly as the race goes on people start falling off and soon enough only those who had purpose and we’re willing to pay the price stated the course till the end.

JOHN 19:30 AMP
When Jesus had received the sour wine, He said, “It is finished!” And He bowed His head and [voluntarily] gave up His spirit.

Jesus declared it is finished. He stayed the course counted the cost and paid the price in full.
Every great achievement requires great sacrifice. There is a price to pay and only those willing to go the full hog can declare it is finished. The price that Jesus paid was so great. At one point while in the garden he tells God that if there is any way that this cup can be removed from him that would have been his will but he goes on to say nonetheless not my will but thine be done. He was whipped and his body was broken. A crown of thorns was pressed on to his head, with a body full of open sores he had to carry the cross. People spit on him and called him names. He was later nailed on a cross and crucified. An act so barbaric that there was a law that prohibited a Roman citizen from being crucified. He went through all this and at the end he was able to declare it is finished.
Are you willing to pay the price? Jesus says;

Matthew 16:24 -26
24 Then Jesus told his disciples, “If anyone would come after me, let him deny himself and take up his cross and follow me. 25 For whoever would save his life[a] will lose it, but whoever loses his life for my sake will find it. 26 For what will it profit a man if he gains the whole world and forfeits his soul? Or what shall a man give in return for his soul?

One story that encourages me to stay focused on the finish line is one of a marathon runner.
Tanzanian John Stephen Akhwari was competing in the Olympic Marathon in Mexico City in 1968. Approximately 19 km into the 42 km race, there was jostling between some runners and he fell badly. He wounded his knee and his shoulder also hit the pavement hard. In fact, his leg was bleeding and his knee was apparently dislocated. Medical staff urged him to withdraw but he kept on. Akhwari continued running, walking and a slow limping run at points. He finished last among the 57 competitors who completed the race well over an hour after the winner.
By then, the sun had set, and there were only a few thousand people left in the stadium. But of course, as he finally crossed the finish line a cheer came from the small crowd. A television crew was diverted from a medal ceremony and caught this courageous man’s agonizing finish.
When interviewed later and asked why he ignored the advice to pull out and continued running, Akhwari said,

“My country did not send me 10,000 miles just to start the race; they sent me to finish the race.
Not many people remember the name of the gold medal winner that year. (In case you were wondering, it was Mamo Wolde of Ethiopia).

But we remember and honor Akhwari because he finished the race in the most difficult circumstances.
Will you pay the price, will you finish your race?