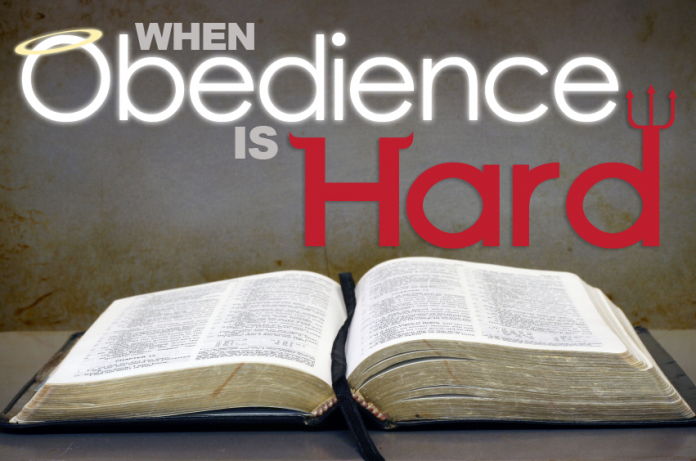 Philippians 2:8 AMP
8 After He was found in [terms of His] outward appearance as a man [for a divinely-appointed time], He humbled Himself [still further] by becoming obedient [to the Father] to the point of death, even death on a cross.

A Christ-like mind is one that walks in obedience to the voice and direction of God. Not only did Jesus humble Himself to be in the form of a human, He also went on to become obedient to the Father to the point of death, even death on a cross. Before we even talk about being obedient to the point of death, let’s look at Him humbling Himself to become a man. When you think about it, that’s like a demotion. How many of us would be obedient to take a lesser position so that someone else can benefit? As we learnt yesterday, though He was in the form and likeness of God in every aspect of deity, Christ did not consider it as something to hold on to and so in obedience He humbled Himself to become human. Then there is the obedience to the point of death on the cross. Obedience is easy when you are in agreement with what you are being told to do, but what about when the very thing you are instructed to do brings pain and suffering in your life, or when you simply do not understand it? How many of us would walk in obedience then?

We see Jesus in the garden of Gethsemane struggling with what was before Him but in conclusion, He says “none the less Father, not my will but thy will be done” Jesus said that He only does what He sees the father do.

I think we sometimes confuse knowing with obedience. Just because you know what the bible says and you can even preach about it does not necessarily mean that you are walking in obedience. I am sure if you stop many people on the streets and tell them to complete the following verse “For God so loved the world that He…….. they will complete it without a struggle, but how many are actually walking in obedience to it?
A Christ-like mind is one that walks in total obedience to Gods word.

James 1:22
22 But prove yourselves doers of the word [actively and continually obeying God’s precepts], and not merely listeners [who hear the word but fail to internalize its meaning], deluding yourselves [by unsound reasoning contrary to the truth].

1 Samuel 15:22 (AMP)
22 Samuel said, “Has the LORD as great a delight in burnt offerings and sacrifices As in obedience to the voice of the LORD? Behold, to obey is better than sacrifice, And to heed [is better] than the fat of rams.