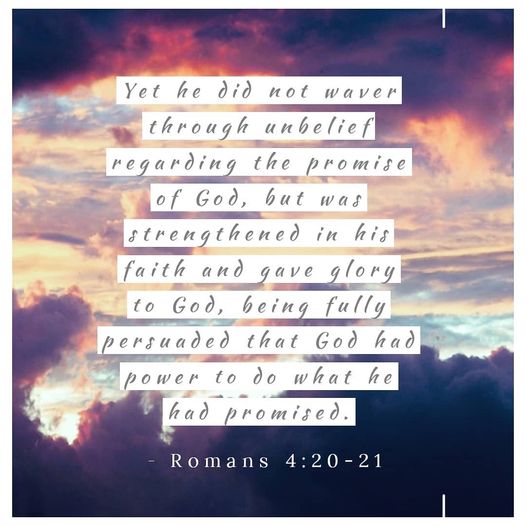 Romans 4:20 NKJV
“He did not waver at the promise of God through unbelief, but was strengthened in faith, giving glory to God.”
A group of employees owed their kind employer huge amounts of money and it seemed almost impossible for all of them to ever pay him back, and because of this, many of them were afraid to face their employer so they kept avoiding him. One day they got to work and found a huge notice in the general office that said; “Anyone who will come to my office today within office hours to settle accounts with me will receive a full pardon for all they owe.” It was signed by the boss.
That whole day no one was brave enough to face the boss and settle accounts, instead they spent the whole day murmuring in groups speculating what would happen if one went to settle accounts with the boss and whether the pardon incentive was a trap.
A few minutes before close of office, one young man gathered the courage and went in to see the boss and to his amazement his accounts were settled and he was forgiven. In his joy he wanted to rush out and tell his friends that it was true but his boss restrained him and kept him in his office until it was time to close. None of his colleagues benefited from the pardon because of their unbelief.
Abraham and Sarah though they tripped a bit, they went on to grow and did not waver in their faith and they saw the fulfillment of Gods promise. 8 of the 10 spies that went in to scout the promised land contaminated the whole nation with their unbelief and that whole generation except Joshua and Caleb did not enter the land of promise.
Unbelief will keep you away from the new thing that God is doing.