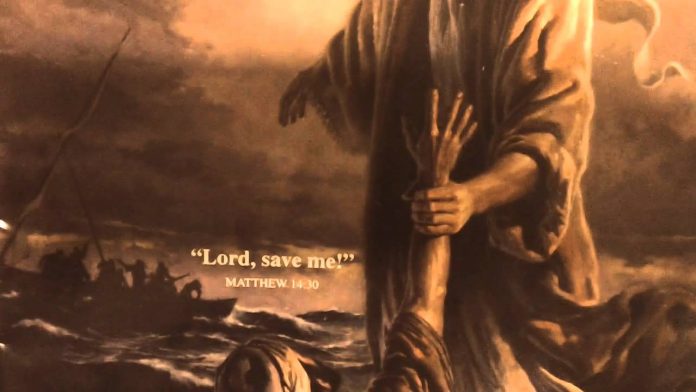 28 Peter replied to Him, “Lord, if it is [really] You, command me to come to You on the water.” 29 He said, “Come!” So Peter got out of the boat, and walked on the water and came toward Jesus. 30 But when he saw [the effects of] the wind, he was frightened, and he began to sink, and he cried out, “Lord, save me!” 31 Immediately Jesus extended His hand and caught him, saying to him, “O you of little faith, why did you [c]doubt?” 32 And when they got into the boat, the wind ceased. 33 Then those in the boat worshiped Him [with awe-inspired reverence], saying, “Truly You are the Son of God!”

Several things that I love about this passage of scriptures;

I love that Jesus directed the disciples to cross over and yet they encountered rough waters because I can identify with that.

I love the fact that they were terrified because I have found myself terrified in different circumstances and it became even worse when Jesus appears and they think it’s a ghost.

I love the fact that Jesus actually appeared to them to help them right in the midst of their fears. That’s encouraging to know that He cares enough to show up in my circumstances, I am never alone and He know exactly what I am going through.

I am challenged with Peter jumping out to walk on water at the command of Jesus without hesitation. Challenged because I probably would have remained in the boat with the other 11 overcome by fear. I have some growing up to do where my faith in similar situations is concerned. It is easy to say it when things are smooth but it is when things get rough that we know what we are really made of.

I identify with Peter shifting his focus from Jesus back to the wind and waves and then he starts to sink. I have been there where I begin well with lots of faith but then as I go along I allow what I see in the natural to kill my faith and I start  doubting and sinking.

What I love the most is that Jesus was right there to save Peter who had a little faith that wavered when he started sinking and he cried out Lord save me! Jesus extended his hand and caught him….. Come to think of it, the bible does not say that Jesus carried Peter. He extended his hand and caught him to prevent him from sinking and then they made their way to the boat and got in. I can see them walking on the water back to the boat together. Jesus did not only come to the rescue of peter who had little faith, He also came to the rescue of the other 11 in the boat because when they got back into the boat the winds ceased.

Is your faith failing and are you beginning to sink? Just make the short prayer that Peter made “Lord save me!” and see the Lord extend his hand to catch you. If on the other hand you are part of those who remained in the boat simply allow Jesus to come on board and the winds will cease. He is the God who saves!