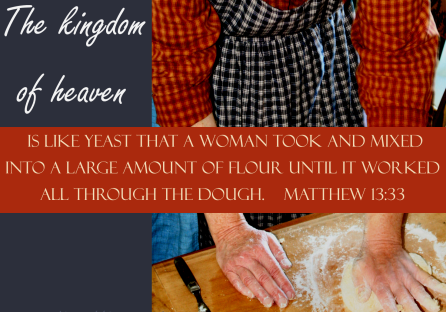 Matthew 13:33 (AMP)
33 He told them another parable, “The kingdom of heaven is like [a]leaven, which a woman took and worked into three [b]measures of flour until all of it was leavened.”

The book of Matthew 13 is filled with different illustrations that Jesus tells using things we are familiar with to explain to us what the kingdom of God is like.

We use a little leaven and knead it into the dough but it affects the whole dough. When you look at the numbers so to speak, the leaven may seem like it is fighting a losing battle compared to the floor in fact the dough disappears into the floor and it may seem like it has lost but that is just the beginning of the story and so it is with the kingdom of God.

Jesus began with a small band of men and when he ascended back to heaven you would have thought his message would die but here we are today and the number has grown from 12 to millions across the world and it is still growing.

Just like the leaven that works within the dough and you cannot see it but you see the effect in behavior of the dough so it is with Gods kingdom. It is established in us from the inside, within our hearts and the effects are seen on the outside.

The leaven works its way on the inside, slowly but progressively and so it is with the kingdom of God it continues to grow until it affects the whole world. Habakkuk 2:14 “The earth will be filled with the knowledge of the glory of the LORD, as the waters cover the sea”

Just like the leaven which may look so insignificant, so is the kingdom of God yet it is at work within, turning around the hearts of men one person at a time carefully exerting its influence for all to see. The flour will eventually react and behave in the manner the leaven on the inside will direct it to. And so it is with the hearts of men as the kingdom from within exerts its influence.