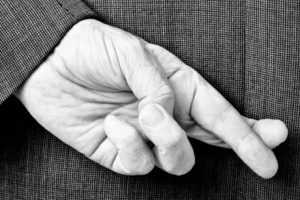 Proverbs 6:16:19
16 These six things the LORD hates, Yes, seven are an abomination to Him: 17 A proud look, A lying tongue, Hands that shed innocent blood, 18 A heart that devises wicked plans, Feet that are swift in running to evil, 19 A false witness who speaks lies, And one who sows discord among brethren.

A store manager hear his clerk tell a customer, “No, ma’am, we haven’t had any for a while, and it doesn’t look as if we’ll be getting any soon.” Horrified, the manager came running over to the customer and said, “Of course we’ll have some soon. We placed an order last week.” Then the manager drew the clerk aside. “Never,” he snarled, “Never, never, never say we’re out of anything–say we’ve got it on order and its coming. Now, what was it she wanted?” “Rain,” said the clerk.

Lies have become such a common thing today that many of us don’t think much of it. God says that a false witness, one who speaks lies is an abomination to him. Over this election period I have seen so many people peddle lies on social media. Some of us are quick to speed all manner of spicy stories without taking the time to verify how true they are.

Proverbs 12:22
The LORD detests lying lips, but he delights in people who are trustworthy.

To speak lies is to directly come against what God stands for because Jesus is the way the TRUTH and the life. To bear false witness is align yourself with the devil because he is the father of all lies. A lie is a lie no matter how big or small one may consider it to be. It was what appeared like a small lie from the serpent that caused Adam and Eve to fall into sin.

Then there is the one who sows discord among brethren. This simply means one who sows or plants seeds that break the unity among the believers. Are you the kind of person who sows seeds of anger and bitterness, seeds of distrust and hatred in the hearts of other believers through your words and actions? God hates that, it is an abomination to him. Those are works of the flesh.

The words that you speak and even what you post on social media, does it sow seeds of discord among the believers or does it edify them?

Speak the truth in love and edify one another!