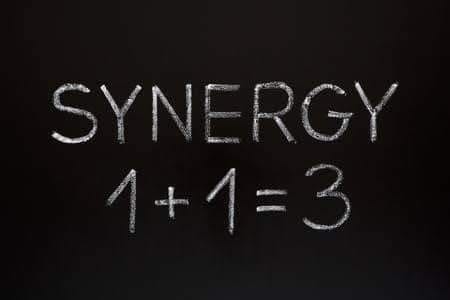 Ecclesiastes 4:9‭-‬10 NKJV
Two are better than one, Because they have a good reward for their labor. For if they fall, one will lift up his companion. But woe to him who is alone when he falls, For he has no one to help him up.
When geese fly, they often do so in a v formation and this is not just by chance, it is intentional because it gives the birds synergy.
When the geese flap their wings, they create an uplift for the birds that are behind it. This seemingly small thing enables the geese to add up to 71% performance to their flying range than if each bird was flying alone.
Wow, small thing but huge impact.
As believers we are the body of Christ we should share a common direction and community because we believe in the same Lord and hence we should have one mission. If only we learnt to work together and not compete, then the mission would be easier and we would get it done faster.
The principle of synergy simply States that the combined value and performance of two or more companies will be greater than the sum of the separate individual parts.
God’s plan was for his children to work together as a body but sadly we have allowed trivial things to divide us making us compete one against the other. Think about Nehemiah and how he was able to get his people to work on the walls and gates of Jerusalem and they completed the task in 52 days.
Imagine what the churches in your city would accomplish if they put all their resources together to accomplish one task….. Nothing would be impossible.
Do you like working alone or working with others?
How has that affected the work that you do?
What would it take for the church to work together as one?