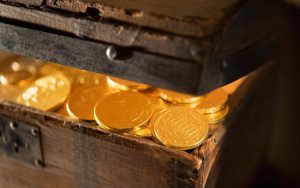 Matthew 13:44
44 “The kingdom of heaven is like a [very precious] treasure hidden in a field, which a man found and hid again; then in his joy he goes and sells all he has and buys that field [securing the treasure for himself].

We all love treasure, something that has been hidden from the view of others and you find it. Great movies have been made about men seeking treasure in forgotten cities buried in the jungle or treasure under the sea hidden in ships that sank hundreds of years ago. Usually the adventure in such movies are the obstacles along the way, hidden danger and traps that the treasure seeker has to overcome in order to acquire the treasure and so it is with the kingdom of God.

Why would God hide his kingdom and not expose it to everybody? Because it is a treasure available only to those who will seek it. He says if you seek me you will find me. The treasure was hidden in a field and yet this man found it. He did not just stumble on it he was on a deliberate quest to find it.
I love the fact that when he found it, he goes and sells all that he has for the sole purpose of acquiring the treasure. This tells me that the treasure has now become the most important thing in his life such that he is willing to give up all he has to get it. It also tells me that the treasure is so important that he is willing to move away from what he has known all his life so as to begin a new life in the land where he has found the treasure. This treasure fulfills all that he needs in life because he is willing to sell all to acquire it. No wonder Jesus would tell us in;

Matthew 6:33 (AMP)
33 But first and most importantly seek (aim at, strive after) His kingdom and His righteousness [His way of doing and being right—the attitude and character of God], and all these things will be given to you also.

When you find the kingdom and you become part of it doing things Gods way being right with Him having the attitude and the character of God because that is the kingdom, then you will discover that all these other things that we chase after will be an addition to us. We will not even bother chasing after them.
Have you found the kingdom? Is it so precious to you that you have given up everything you have so that you can get it?