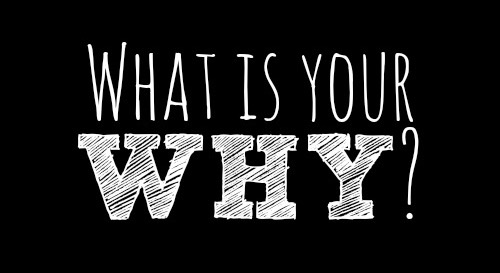 1 Samuel 17:45-47
45 David answered: You’ve come out to fight me with a sword and a spear and a dagger. But I’ve come out to fight you in the name of the LORD All-Powerful. He is the God of Israel’s army, and you have insulted him too! 46 Today the LORD will help me defeat you. I’ll knock you down and cut off your head, and I’ll feed the bodies of the other Philistine soldiers to the birds and wild animals. Then the whole world will know that Israel has a real God.47 Everybody here will see that the LORD doesn’t need swords or spears to save his people. The LORD always wins his battles, and he will help us defeat you.

David had a why, a vision, an end in mind, a purpose and that fuelled the fire that was burning in his heart. His why was bigger than Goliath and thus he was willing to put his life on the line. Many of us become faint at heart because we focus on the disadvantages and the more we do so, the bigger they seem to us. Our vision, our why is not convincing enough and so in the midst of adversity we abandon it, but not David.
Goliath was a giant, way bigger than the average man. David was a teenager, just a boy as King Saul reminded him.
Goliath was a trained soldier he had the skill the strength and the strategy. David was a simple shepherd boy with no military training, but the little lad could sling a stone.

Goliath had weapons that would tear a man apart with one swing; he had body armour to protect him a shield to block any attacks directed towards him. David had a stick a sling and 5 smooth stones and most importantly he had Gods backing because he had a divine vision, a divine why!

David says to Goliath, the reason why I will kill you and cut off your head is simply….not so that I can be famous or prove to the world that I am stronger than you, God will give me the strength to take you down so that the whole world will know that Israel has a real God. Everybody here will see that the LORD doesn’t need swords or spears to save his people. The LORD always wins his battles, and he will help us defeat you.