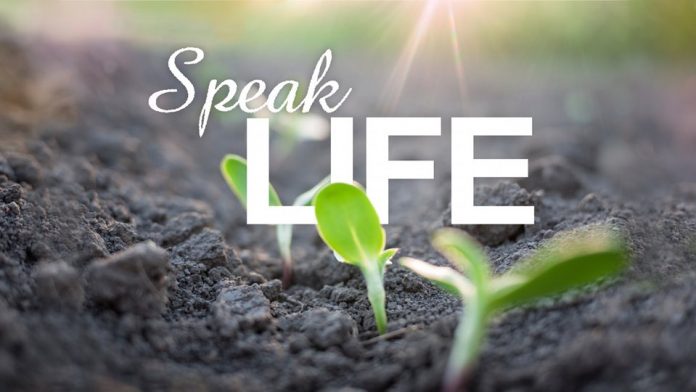 1 Samuel 17: 45-47
45 Then David said to the Philistine, “You come to me with a sword, a spear, and a javelin, but I come to you in the name of the LORD of hosts, the God of the armies of Israel, whom you have taunted. 46 This day the LORD will deliver you up into my hands, and I will strike you down and remove your head from you. And I will give the dead bodies of the army of the Philistines this day to the birds of the sky and the wild beasts of the earth, that all the earth may know that there is a God in Israel, 47 and that all this assembly may know that the LORD does not deliver by sword or by spear; for the battle is the LORD’S and He will give you into our hands.”

I remember once seeing a book with the title “Never run at your giant with your mouth closed!”
David was just but a boy, in fact Goliath looked at him and noted that he was just a boy and handsome. Though he was a boy, David had some pretty big words to say. You would have though the one speaking was a soldier trained and with many years of experience at war, but that was not the case.
David spoke out of conviction. He was convinced without any shadow of doubt that God would enable him to kill Goliath the giant. In his mind, there was no way he would fail!
Words have power, the bible says that life and death are in the power of the tongue. Remember the children of Israel and how they spoke words of fear and that kept them from the land of promise which God had given them? The same applies to you and I.

If you have the conviction that you can, then let your words align with your convictions and speak them out boldly in faith.
Speak forth your victory before you step into the battle field.