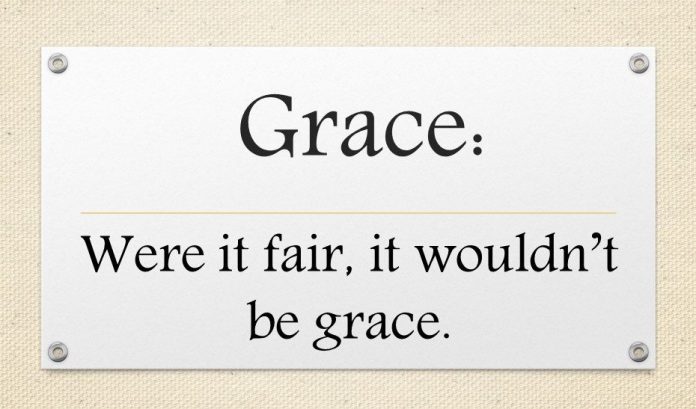 Matthew 20:10-21
10 Now when the first [to be hired] came, they thought they would get more; but each of them also received a denarius. 11 When they received it, they protested and grumbled at the owner of the estate, 12 saying, ‘These men who came last worked [only] one hour, and yet you have made them equal [in wages] to us who have carried [most of] the burden and [worked in] the scorching heat of the day.’

When the master went out early morning and got the first bunch of workers, they agreed on the work and payment. The pay was a denarius which was a fair wage for a day’s work for unskilled labor. This adds up to approximately 2.8 dollars. When you go through the parable you discover that the master did not go against his word. He actually paid them what they had agreed on.

At this point it when it hit me that this parable is about God’s grace. As many preachers have said before, “grace is not fair” Think about this, the disciples had walked with Jesus throughout his ministry, they were with Him when He healed the sick, they were with Him in the boat when a storm hit. Then on the cross as He is about to die, next to Him there is a thief who has lived a sinful life far away from God and yet Jesus tells Him;

Why does he get to be the one to walk into paradise with Jesus? He seems like such an opportunist doesn’t he? Well that’s grace and grace is not fair. Grace is unmerited favor; it is getting what you do not deserve.

Have we not been there at one point or another or we are still in that spot where we feel God is not fair. You feel that you have put in more work that someone else and yet God rewards them the same way he rewards you or even better. This develops into a judgmental heart where we look at others and we feel they do not deserve God’s grace, God’s forgiveness, and Gods favor.
Are you angry because God has blessed someone and you feel they do not deserve it? Think about what God has done for you, would you say that you deserve it? If you would apply the same standards you apply on others to yourself, would you stand? Besides there might be someone looking at what God has done for you and thinking the same.

As the master said in this parable, He is permitted to do what He pleases with what He has.
Rejoice in what God does for others and don’t have a judgmental heart.