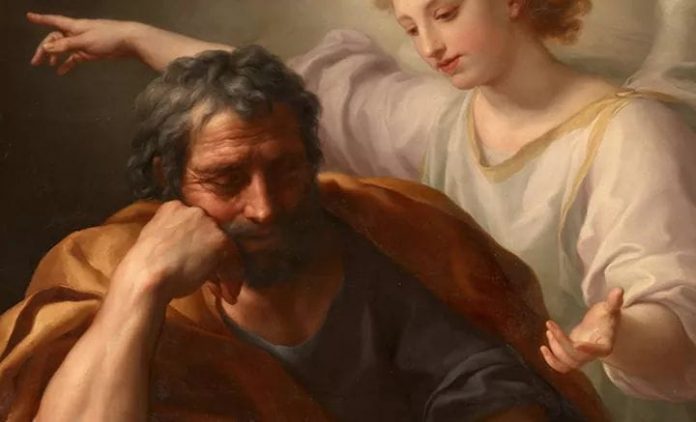 Matthew 1:18-19
18 Now the birth of Jesus Christ was as follows: when His mother Mary had been [j]betrothed to Joseph, before they came together she was found to be with child by [the power of] the Holy Spirit. 19 And Joseph her [promised] husband, being a just and righteous man and not wanting to expose her publicly to shame, planned to send her away and divorce her quietly.

I cannot even begin to imagine what must have been going through Josephs mind. These two were engaged and in their custom the only way to break an engagement was through divorce. According to their custom, Mary and the one who had slept with her were to be stoned to death (Deuteronomy 22:23, 24) Joseph being the noble man that he was had chosen to divorce Mary quietly and rid her of the public ridicule and outcry. It took the visitation of an angel to convince Joseph otherwise.

As much as Mary was chosen to be the mother of Jesus, Joseph was also chosen to be the step father of Jesus emphasizing the important role of a father in the family. What a great responsibility.
I am sure Joseph did not understand everything and I am sure he had loads of questions but he walked in obedience to Gods word, he loved Mary and he took care of her and Jesus as a baby. Though much is not written about him, he fulfilled his role as the earthy father that Jesus needed as a young boy and young man growing up in the way of life of the Jewish people.

Sometimes we find ourselves in situations that we do not understand situations that are not of our own making and we may feel scared and we want out because everything before us does not seem right, going against culture and everything we have been taught to believe in. In such moments what do you do? Do you make hasty decisions or do you think things through and remain open to hear from God?

Joseph thought things through without reacting, he considered what would be best not just for him but also for Mary and the child she was carrying and in those moments God spoke to him and he was quick to obey. What seemed like a disaster and a letdown was instead the greatest blessing that anyone could wish for.