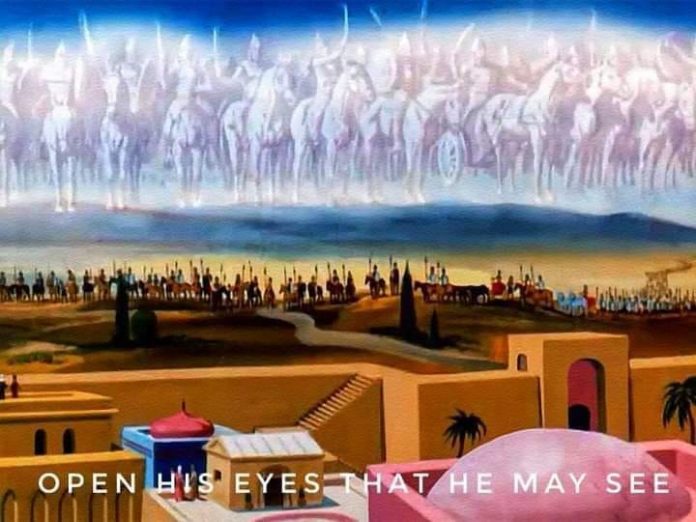 2 Kings 6:17
17 Then Elisha prayed and said, “LORD, please, open his eyes that he may see.” And the LORD opened the servant’s eyes and he saw; and behold, the mountain was full of horses and chariots of fire surrounding Elisha.
The king of Aram is making war against Israel, but there is one problem. Israel is always a step ahead of him. He suspects that he has a traitor in his camp who keeps leaking his secrets to the king of Israel. His servants reveal to him that there is no traitor in his camp, but there is a prophet in Israel who tells the king of Israel what the king of Aram says even in his bedroom. The king is furious, and he sends a might army to surround the city and capture the prophet Elisha.
Let’s pause there and look at this situation;
If God has been revealing to the prophet what the king is planning against Israel, won’t He also reveal to the prophet what the king is planning against him? Yes, he would and he did. The servant of the prophet wakes up and when he sees that the city is surrounded he goes into panic. Elisha prays for God to open his servant’s eyes that he may see that those that are for them are greater than those that are against them. God opens the veil that separates the natural from the spiritual and the servant sees a might army, horses, and chariots of fire surrounding the mountain.
Let’s pause again and think about this;
The reality that what we do not see affects the natural world that we live in. There is a great spiritual battle happening in the heavenly and God’s mighty army is fighting for us. How many times are we like the prophet’s servant? We worry and allow anxiety and panic to paralyze our lives because of what we see in the natural yet in the spiritual God has a might army ready to fight for us. Elisha was confident because he had a revelation of what was happening.
This war was won through one man and prayer. He prays and God strikes the whole army with blindness and then Elisha leads all of them to Samaria, then he prays again and God opens their eyes. The enemy is now surrounded, and the king wants to kill them, but Elisha tells him to feed them instead and send them back on their way, and the king of Israel does so.
Indeed, the weapons of our warfare are not carnal, but mighty through God for the pulling down of strongholds!