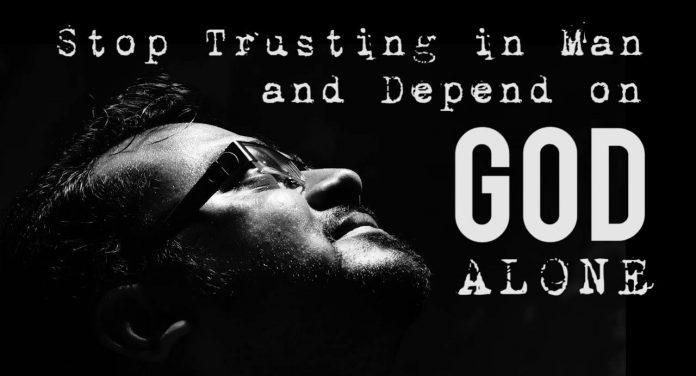 Judges 6:7
7 And the LORD told Gideon, “With the three hundred men who lapped I will rescue you, and will hand over the Midianites to you. Let all the other people go, each man to his home.”

Depending wholly on God is not an easy task. You have to know God to trust him. That is where faith comes in. Imagine starting off with an army of 32000 men and by the time God is done you only have 300 men and God wants you to trust Him. Besides the war strategy he is giving you does not make sense. Do you trust Him and go on ahead or do you lean back on what you know?
This one thing I know, by the time Gideon is going out to war, he is not depending on the numbers of his men and neither is he depending on their strength because clearly they are outnumbered and the enemy has more muscle than they do. Gideon has put all his dependence on God. Reminds me of a young man who went off to face a giant that had caused a whole army to hide. David had confidence not in his strength or his sling but in the God that He worshiped.

Today many will depend on who they know or their bank account or their network but as the bible says, cursed is he who puts his trust in man.
To unleash the greatness in you Gods way, you have to look to Him and Him alone because it is only he who can bring it to pass.
David says in;

Psalm 20:7
Some trust in chariots and some in horses,
But we will remember and trust in the name of the LORD our God.

Who are you depending on as you pursue greatness?
Depending on any other thing apart from God is total folly because He is the only one who changes not; He is the same yesterday today and forever. May we learn to look to Him and trust Him especially when it seems like the very ground we are standing on is caving in and He says “be still and know that I am God!”
Depend on God and God alone!