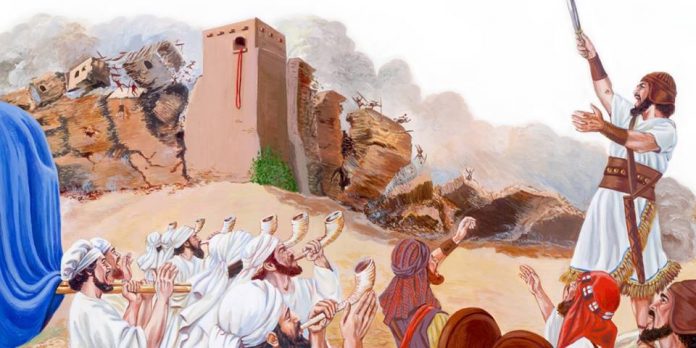 The battle belongs to the Lord is a statement many Christians like to process, and this is true if you and I can trust Him enough to follow His directive. This week we take a look at 5 battles that God won in unconventional ways because His servants were willing to follow.

JOSHUA 6:2-5 AMP
The Lord said to Joshua, “See, I have given Jericho into your hand, with its king and the mighty warriors. Now you shall march around the city, all the men of war circling the city once. You shall do this [once each day] for six days. Also, seven priests shall carry seven trumpets [made] of rams’ horns ahead of the ark; then on the seventh day you shall march around the city seven times, and the priests shall blow the trumpets. When they make a long blast with the ram’s horn, and when you hear the sound of the trumpet, all the people shall cry out with a great shout (battle cry); and the wall of the city will fall down in its place, and the people shall go up, each man [going] straight ahead [climbing over the rubble].”

According to God, this is how you win a war against a fortified city. Jericho was heavily fortified. The walls were massive and it was almost impossible to conquer this city or demolish these walls
If any commander or general heard the strategy that God had given Joshua, they would laugh because humanly speaking it is ridiculous. However, Joshua believed. Joshua had been a witness to the powerful things God had done through Moses; some of which seemed ridiculous that he knew how to trust God’s word no matter how strange the plan sounded.
I wonder what the inhabitants of Jericho were thinking watching from up the wall the children of Israel down below going round their city in silence for 6 days. They must have thought these guys are nuts.
Joshua believed and implemented in faith and God gave them the victory the walls of Jericho did come down on day 7.
Humanly speaking, it was next to impossible but as the Bible says what is impossible with man is possible with God.
Do you have impossibility before you? Ask God for a strategy and follow through in obedience. This one thing is for sure, if you are walking in obedience to the will of God, He will ensure you come out victorious.