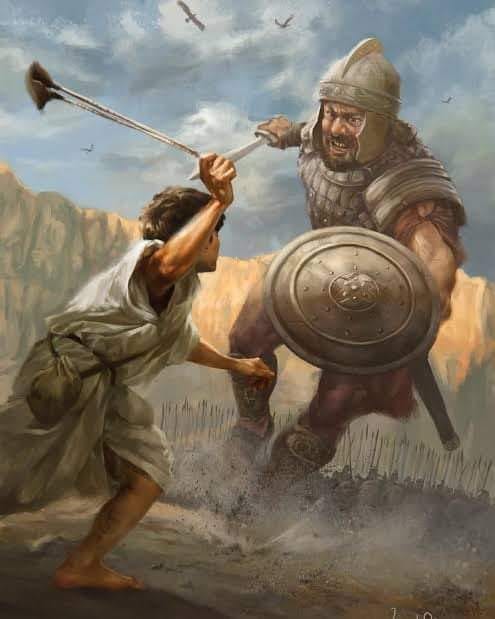 1 Samuel 17:10-11
10 Then the Philistine said, “This day I defy the armies of Israel! Give me a man and let us fight each other.” 11 On hearing the Philistine’s words, Saul and all the Israelites were dismayed and terrified.
One of the greatest, if not the greatest battles of the bible is the one between David and Goliath. Israel is at war with the Philistines, but there is a huge problem and his name is Goliath the Philistine giant. This one man was so huge and intimidating that he had the whole Israelite army plus Saul the king shaking in their sandals. The bible says they were dismayed and terrified.
For 40 days, they were in hiding, for 40 days Goliath would come out every morning and every evening to defy and challenge the Israelite army to send one man to fight him and whoever won then their nation had won. For forty days, Goliath did nothing but talk, but that’s until one young man walked into the scene.
The fact that Saul allowed David to go against Goliath still baffles me until today. Now that we know how the story ends it makes sense, but remember Saul the king had no idea how this would play out in fact, I am sure he was convinced that David stood no chance, but he still sends him out to be killed.
Compared to Goliath, David was more than outsized, Goliath was a giant and David was just a teenager. Goliath was an experienced soldier, while David was merely a shepherd. Goliath had weapons of war, and he was covered with armor, David only had his shepherd’s staff a sling and 5 stones. Goliath was overconfident because he was depending on his size experience and weapons. David was sure because he was depending on God to win this war.
From the spiritual dimension things were different. David was the giant because he knew his identity in God. He understood the covenant he had with God, and he knew the God he believed in. David knew without any shadow of doubt that this was God’s fight and not his.
God chooses to use a teenage boy who is unknown and with no experience to win a battle that had Israel in hiding for forty days. Though David was unknown in Israel, he was well known in heaven, and he was God’s man for the hour. When you are sold out to God and you understand the position you have in Him, then God will use you to bring solutions that will set entire nations free. David did not just appear on the scene, he was faithful in the wilderness when no one was there to applaud him, he had killed a lion and a bear when no one was watching. He had been faithful in the time of preparation, and when the time was right, God unleashed him onto the big stage to save a nation.