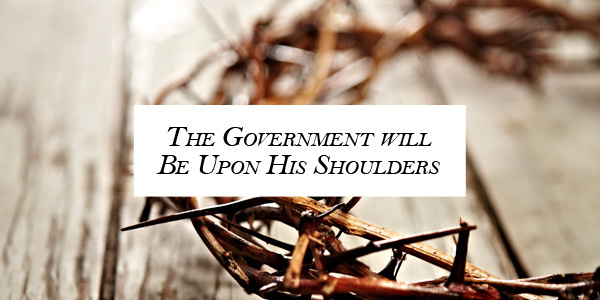 6 For to us, a Child shall be born, to us, a Son shall be given; And the government shall be upon His shoulder, And His name shall be called Wonderful Counselor, Mighty God,

Everlasting Father, Prince of Peace. 7 There shall be no end to the increase of His government and of peace, [He shall rule] on the throne of David and over his kingdom, To establish it and to uphold it with justice and righteousness From that time forward and forevermore.

The zeal of the LORD of hosts will accomplish this.

To govern simply means to direct and control. It can be said to be to direct the way of life of a community a city and country. The prophecy about Jesus talks about government and kingdom and I think sometimes as believers we forget that.

When Jesus began His ministry, he preached about the arrival of a kingdom.

17 From that time Jesus began to preach and say, “[a]Repent [change your inner self—your old way of thinking, regret past sins, live your life in a way that proves repentance; seek God’s purpose for your life], for the kingdom of heaven is at hand.”

He came to show us a new way for our lives to be governed, He came to establish a kingdom one that He upholds with justice and righteousness forevermore. The government of this kingdom is upon the shoulders of Jesus.

Two kingdoms cannot reign in the same domain, one has to overcome the other and that is why Kings go out to war, so that they can conquer new territory and expand their domain. Herod understood this when he got the news that a new king had been born in his kingdom. No wonder he sought to kill the baby because he understood that one king will have to submit to the other and he was not about to submit to no one.

What about you and I? Which kingdom do we belong to, because the kingdom we belong to then determines the values and culture that govern the way we live our life. You cannot claim to belong to one kingdom and yet your way of life is governed by the ways of another kingdom. To belong to a kingdom means you submit to the king, in fact, you are his personal property and you live your life based on what He wants, because when you choose not to, then you automatically become a rebel.

Which kingdom are you submitted to?