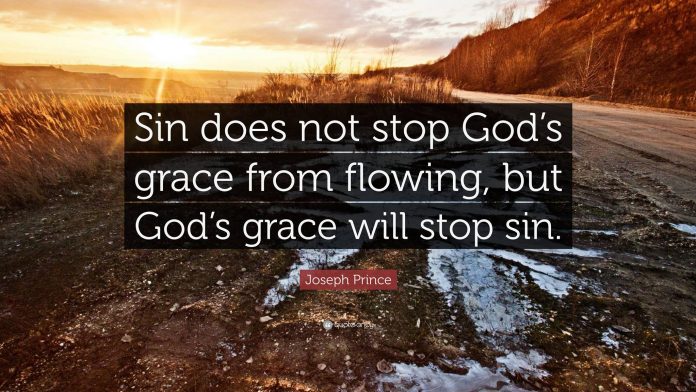 It is said that the late Billy Graham was driving through a small southern town and he was stopped by a policeman and charged with speeding. Graham admitted his quilt, but was told by the officer that he would have to appear in court. The judge asked, “Guilty, or not guilty?” When Graham pleaded guilty, the judge replied, “That’ll be ten dollars — a dollar for every mile you went over the limit. “Suddenly the judge recognized the famous minister. “You have violated the law,” he said. “The fine must be paid–but I am going to pay it for you.” He took a ten dollar bill from his own wallet, attached it to the ticket, and then took Graham out and bought him a steak dinner! “That,” said Billy Graham, “is how God treats repentant sinners!”

Ephesians 2:8
8 For it is by grace [God’s remarkable compassion and favor drawing you to Christ] that you have been saved [actually delivered from judgment and given eternal life] through faith.

Gods Riches At Christ’s Expense! That is grace. Grace is the way God relates to us in the New Testament dispensation. Through grace we get what we do not deserve and at the same time we do not get what we deserve. This is why the grace of God is so amazing! Where there is grace, no one can boast about works, grace has got nothing to do with us and what we have done but everything about Christ and what He has done.

Think about the prodigal son, he takes his inheritance and goes off to live a riotous life wasting everything he has been given. He finally ends up in the “pig pen” and at the lowest point in his life the bible says “he came back to his senses” He goes back home repentant in the hopes that his father can take him back as a servant. His father sees him from a distance and he runs to him and embraces him. The son is remorseful about his actions and asks to be taken back as a servant but the father will not hear of that kind of thinking. He throws a big party for him and re instates him as a son….. Now that is grace and that is the same way that God treats those who would run to him in repentance after “coming to their senses” That’s the power of GRACE!