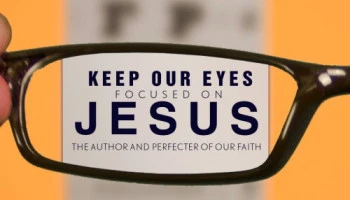 …and they commanded the people, “When you see the ark of the covenant of the Lord your God being carried by the Levitical priests….

Before the children of Israel went in to conquer and take over the land of promise, they had to cross the Jordan River and interestingly God tells them to cross at the time the river is flooded. Take note that most of the year the river is about 100 feet (30 meters) across, but when it floods it bursts its banks and then it’s a totally different story. The Jordan River was an obstacle that was in their way and if they were to enter in then they had to conquer it.

The same applies to us today; there is that thing that represents the Jordan, that thing that is standing in the way of what God has promised you and many times God will tell you to move when that thing is at its worst.

How then do we conquer and enter in?

Focus is key, where is your faith and attention?

God tells the children of Israel to place their attention on the Ark of the Covenant. The Ark represented the presence of God. It was that physical reminder to the children of Israel that God was present with them as they journeyed and thus God was telling them that if they were to cross the Jordan into the Promised Land then they must learn to focus on Him and not the flooded Jordan ahead of them.

We fail to attain the promises of God because we allow the enemy to take our focus from God and we place it on the obstacle in our way. This leads us to worry and soon enough we allow doubt and faithlessness to take root in our hearts.

The children of Israel who had left Egypt faced another kind of Jordan before they were to step in and take the land and this was in the form of Giants in the land. They chose to focus on the Giants and how small they looked in their sight instead of God and the word He had given them and we know what happened to that whole generation except for Joshua and Caleb.

The promises of God are right before you, you can almost taste them but there is a Jordan River and it is flooded. What are you going to do? Where will your focus be?

To cross the Jordan, to walk on water, to overcome your obstacle first focus on God and not the Problem.