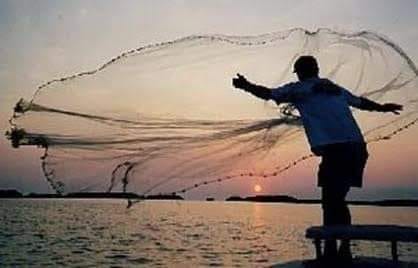 Mark 1:16‭-‬17 NKJV
And as He walked by the Sea of Galilee, He saw Simon and Andrew his brother casting a net into the sea; for they were fishermen. Then Jesus said to them, “Follow Me, and I will make you become fishers of men.”
Imagine a fisherman who sits on his pouch the whole day doing nothing, yet at the end of ever day, he complains about how hard it is nowadays to catch fish. We cannot become fishers of men if we do not take the initiative in faith to go to the lake or sea and cast our nets. The first word in the great commission is the word GO!
We must take the initiative to go and not just that, we must also in faith cast our nets and tell people about Jesus and the good news of the kingdom of God.
When the disciples were filled with the Holy Spirit on the day of Pentecost, they came out of hiding, and Peter took the initiative to tell the people why they were speaking in different tongues. 3000 people were added to their number on that one day. Talk about casting your nets on the right side of the boat!
Jesus always found a way to share the good news about the kingdom of God with his audience wherever he went. Whether it was with the woman at the well or the teachers of the law, Jesus used stories and everyday situations and objects that the people were familiar with to tell them about the kingdom of God.
The process is simple, as we shared yesterday, we must first prepare, mend our nets. Then we must go and we must tell the people about the good news of the kingdom, and ensure we extend to them the invitation to become part of God’s kingdom as well. What’s the point of telling them if we do not extend to them the invitation to become part of the kingdom?
Sometimes we look at people and we make the assumption that they can never embrace the good news because we assume that they are too far gone, so we do not take the initiative to cast our nets. We fail to tell them about the good news of the kingdom. What if Jesus had made that assumption with the Samaritan woman at the well?
The bible says that she went back into the city and told everyone to come see a man who had told her everything she ever did. Many Samaritans from that town believed in Jesus because of the woman’s testimony.
May God open our eyes to see and recognise the opportunities we have everyday to cast out nets and may he give us the courage to cease those moments and tell people the good news of the kingdom.