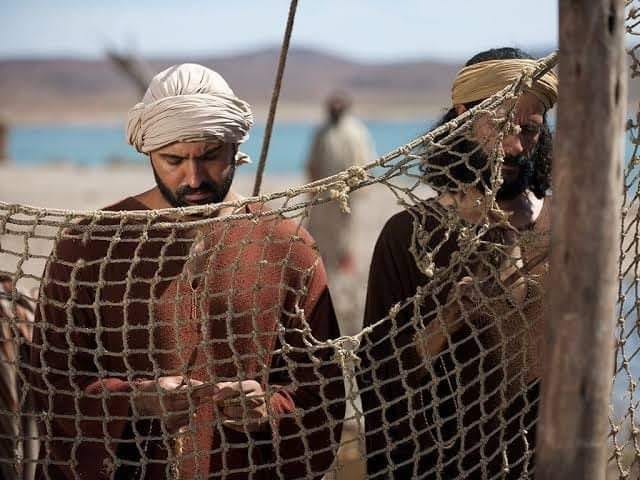 Mark 1:19‭-‬20 NKJV
When He had gone a little farther from there, He saw James the son of Zebedee, and John his brother, who also were in the boat mending their nets. And immediately He called them, and they left their father Zebedee in the boat with the hired servants, and went after Him.
Jesus has just called Peter and his brother Andrew to follow him and he will make the fishers of men. A little further on, he sees two more brothers John and James the sons of Zebedee who are busy mending their nets because they too are fishermen and he gives them the same proposal to follow him and they leave their nets and their father and they follow Jesus.
It’s interesting that out of the 12 that Jesus called to be with him, 4 of them were fishermen.
James and John were busy mending their nets to ensure that they were strong and complete. They wanted to ensure that their nets were strong enough to catch fish when they cast them out in the waters.
If we are to be effective fishers of men, we must also ensure that as we follow Jesus, we must repair our nets and make them strong. How do we do that?
We must be sure of our salvation, being confident of what the Lord has done for us and knowing how to share this with someone else.
II Corinthians 3:5‭-‬6 NKJV
Not that we are sufficient of ourselves to think of anything as being from ourselves, but our sufficiency is from God, who also made us sufficient as ministers of the new covenant, not of the letter but of the Spirit; for the letter kills, but the Spirit gives life.
Sometimes as believers we are afraid to tell others about Christ because we ourselves have not fully understood God’s plan of salvation and thus we do not know how to properly articulate it to others. As the disciples walked with Jesus, as they followed him, they grew in their understanding of God’s plan for salvation to such a place that 3.5 years later after Jesus had ascended back to heaven, these men turned the whole known world upside down.
I Peter 3:15 NKJV
But sanctify the Lord God in your hearts, and always be ready to give a defense to everyone who asks you a reason for the hope that is in you, with meekness and fear;
Prayer is also key when talking about repairing our nets. we must be ready in season and out of season to give a defense to everyone who asks for the reason of the hope that is in you. The place of prayer, humility and always depending on God ensures that we are always ready.
The question then is, what is the shape of your nets today?