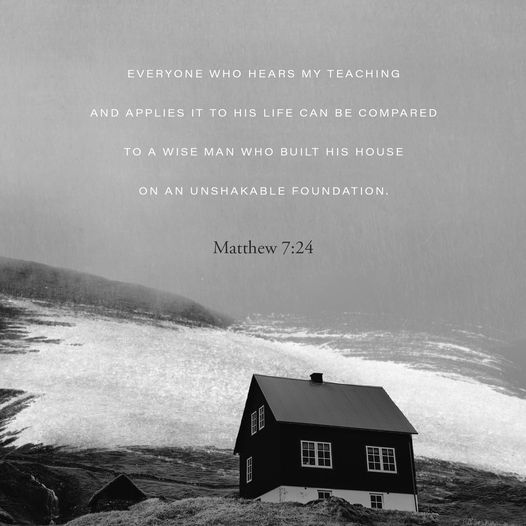 Matthew 7:24
“So everyone who hears these words of mine and acts on them, will be like a wise man [a far-sighted, practical, and sensible man] who built his house on the rock.”
Finishing strong is determined by one very important thing, and that is the foundation you build on. Jesus talks about two builders, a wise one and a foolish one. The foolish builder builds his house on the sand. This house had no foundation and most likely it took such a short time to build it. As you know, the sand is not anchored and it is sifted by the winds and by the storms. The sand represents all other things that are outside of God and his word. Many today are building their lives on fame or on money and flashy things, things that have no foundation and can be easily swayed whenever there is a storm.
The wise man built his house on the rock. This took time and effort. He had to go past the sand and dig deep to find the rock that he can anchor his house on. That took work and commitment and it took time. If the two builders were building side by side, most likely the man who built his house on the sand was doing his finishing while the other who built on a rock was still digging to get to the rock.
Think about this, when the two houses were finished, you probably would not be able to tell the difference. The house built on the sand probably looked more appealing because the owner was more concerned with how it looked as opposed to what it was standing on. Then the storm came and the truth was revealed concerning both houses. The house built on sand did not stand a chance, it was destroyed while the one built on the rock was left standing.
Jesus said that those who hear his word and act on it are the wise ones who have built their house on the rock. 2020 may look like it was a devastating year. Indeed, a storm did sweep through the entire globe and lots of houses came tumbling down. This one thing is for sure, if you have built your life on the word of God, you are still standing because nothing can ever come against you and succeed. Your house is built on the solid rock that cannot be shaken.
Reflective Thoughts;
What has this year revealed to you about the house that you are building? As we look to a new year, how can you ensure that your house is built on the solid rock? What are you planning to do differently in 2021?