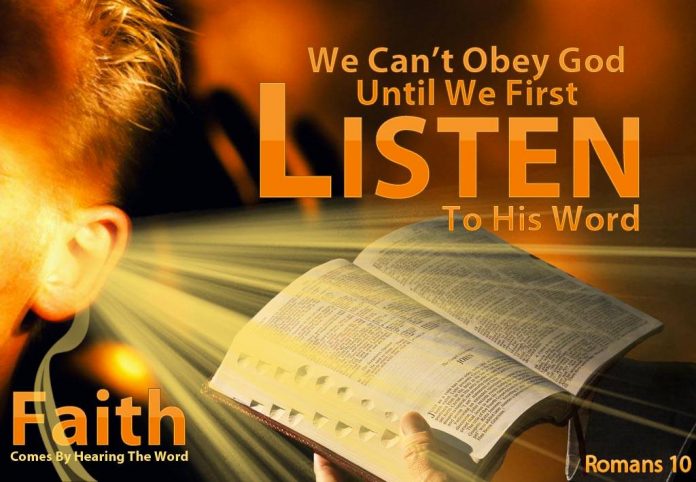 Romans 10:17 AMP
17 So faith comes from hearing [what is told], and what is heard comes by the [preaching of the] message concerning Christ.

Faith is one of the pillars of our Christian walk because without it you and I cannot please God. It is the foundation upon which our walk with the Lord is built on.

Faith comes when we hear the word of God. It is believing what God has said! Every time we hear the word of God, faith is activated in our lives but that’s just the beginning because we have the responsibility to do something because of what we have believed, for the same bible tells us that faith without works is dead.
What have you heard?
What has God spoken to you?
I have seen people get disappointed because they tried to operate on someone else’s faith or they believed a word from a man and not from God.

Hebrews 11:8 (AMP)
8 By faith Abraham, when he was called [by God], obeyed by going to a place which he was to receive as an inheritance; and he went, not knowing where he was going.

Abraham did not just wake up one day and decide to move, no, he heard something. God called him and gave him clear instructions and on hearing the word, faith was activated in Abraham and he acted on it by obedience even though he had no idea where he was going.

Think about Noah, he did not just wake up one day and thought to himself that building an ark was a cool idea. He heard from God and though what he heard sounded ridiculous at the time, though many ridiculed him and thought he was crazy, he obeyed and his household was saved from the flood.

Faith comes from hearing and hearing the word of God! Do you have the capacity to hear from God? Does he speak when you read the bible or when you listen to preaching’s? Do you know when he speaks to you and gives you specific instructions?
When you can’t tell the voice of God, you will operate based on what someone else heard or what they tell you and you will end up disappointed.

The key to great faith is to have good ears for faith comes when we hear the word of the Lord!