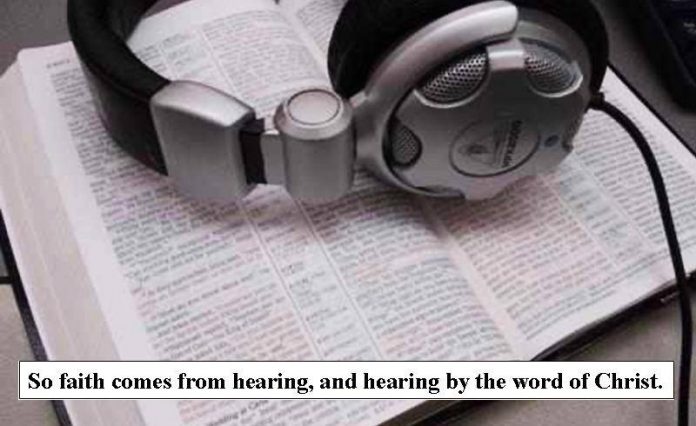 Romans 10:15-17 (ESV)
15 And how are they to preach unless they are sent? As it is written, “How beautiful are the feet of those who preach the good news!” 16 But they have not all obeyed the gospel. For Isaiah says, “Lord, who has believed what he has heard from us?” 17 So faith comes from hearing, and hearing through word of Christ.

Faith is a byproduct of hearing the word of God. If you are a good hearer, one with a good and noble heart, then faith will come, you don’t have to cry or beg for it, faith will come. Every Sunday we fill our churches to hear the word of God and to fellowship but sometimes I wonder, does faith come? Looking at how you live out the rest of the week, would you say that faith came?
It is only when you believe what you have heard then you will have the conviction to act on it and then the fruit carried in that word will be made manifest in your life.
Reminds me of the following story;

There was a rich Christian who had a large company of employees, and many of them owed him money. He was constantly trying to teach them something about Christianity, and one day he hit upon a plan. He posted a notice for his employees to see that said,
“All those who will come to my office between eleven and twelve o’clock on Thursday morning to present an honest statement of their debts will have them cancelled at once.”
The debtors read the notice with a great deal of skepticism, and on Thursday morning, although they gathered in the street in front of his office, not one of them went to the door. Instead they gossiped and complained about their employer, and ridiculed the notice he had posted. They said it didn’t make sense.
But finally, at 11:45, one man jumped forward, dashed up the steps into the office, and presented his statement.
“Why are you here?” the rich man asked him.
“Because you promised to cancel the debts of all those who would come as you instructed,” the other replied.
“And do you believe the promise?”
“Yes, I do.”
“Why do you believe it?” insisted the employer.
“Because, although it was too much for me to understand, I know that you are a good man who would not deceive anyone.”
The rich man took the bill and marked it “Paid in full,” at which time the poor man, overcome, cried out,
“I knew it! I told them so! They said it couldn’t be true, and now I’m going out to show them.” “Wait,” said his benefactor, “it’s not quite twelve o’clock. The others are not entitled to any special proof of my sincerity.” When the clock struck twelve, the forgiven debtor ran out waving his receipt in the face of his fellows. With a mad rush they made for the door, but it was too late. The door was locked.

Have you believed what you have heard?