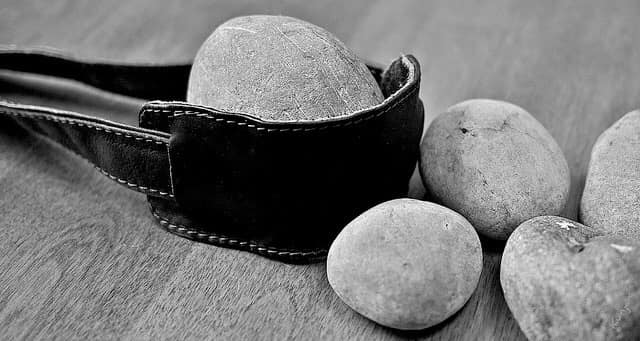 David was a shepherd; his job was to care after the sheep he was no soldier. The most logical thing was to suit up like a soldier and go into the battle field to face Goliath. That is what everybody around him thought including the King, no wonder he offered David his armor.
When it comes to progressing Gods kingdom, we cannot rely on worldly methods.

1 Samuel 17:38
Then Saul clothed David with his armor. He put a helmet of bronze on his head and clothed him with a coat of mail, and David strapped his sword over his armor. And he tried in vain to go for he had not tested them
Then David said to Saul, “I cannot go with these, for I have not tested them.” So David put them off.

Here you are just about to face the biggest opposition in your life. If this man gets a hold of you, he can literally tear you into pieces and instead of choosing a helmet to protect your head, body armor and a sword, you prefer a sling and 5 smooth stones. How unrealistic can one be?

Courageous believer’s methods are different from the conventional methods of the world. David’s methods were so different that even Goliath was surprised at how this young man came at him with stick and stone but he missed it because those were not David’s weapons.

1 Samuel 17:45
Then David said to the Philistine, “you come to me with sword and spear and with a javelin, but I come to you in the name of the Lord of hosts, the God of the armies of Israel whom you have defied.

A courageous believer’s methods are different because he places his trust not in the physical weapons and strategies but in the name of the Lord
David tries on Saul’s amour and it feels awkward on him because he had never tested it. Though it was accepted and trusted armor in battle, he was not familiar with it and the Lord he trusted was leading Him in a different way.
When you walk with the Lord, Hid ways are not like our ways His methods are not like our methods. They don’t make sense to the world but they work every time all the time. Trust His way.