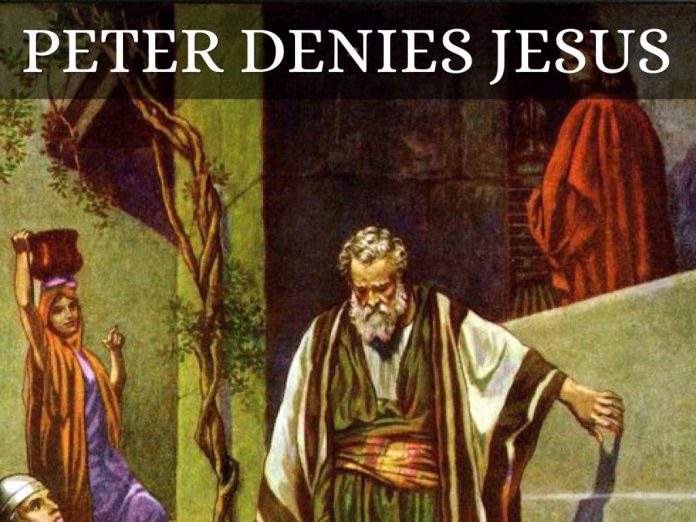 Mark 14:70-72
After a little while, those standing near said to Peter, “Surely you are one of them, for you are a Galilean.”71 He began to call down curses, and he swore to them, “I don’t know this man you’re talking about.” 72 Immediately the rooster crowed the second time.[h] Then Peter remembered the word Jesus had spoken to him

First it was pride, “all these others may deny you but I will never deny you, I would die for you!” Then it was prayerlesness Peter slept when he was supposed to pray after which we see him fighting a spiritual battle in the flesh by cutting of someone’s ear. Prayerlesness led to following Jesus from a distance after which one begins to get comfortable hanging out with the wrong company. Now it’s outright denial. Peter not only denies Jesus once but three times. He even cursed and swore that he did not know Jesus. This is the same man who hours before has said that he was willing to die for Jesus. Words are cheap and we can say all sorts of things when things are OK but when the heat is turned on that is when we know what one is really made of.
Backsliding or denying Jesus does not just happen, it’s a process as we see in the episode of Peter. The important thing is to recognise where you are in the process and do something about it. Peter recognised after he had denied Jesus but thank God for his grace because Peter was restored. Can you see yourself in the process? Are you proud always depending on your own strength thinking you are better than others? Watch out because that will grow into something else. This will happen so subtly that you will not even realise it until you one day like the prodigal son you find yourself living with the pigs.
How I pray that we come to our senses and recognise where we are and if the process has already begun in our life. It’s time to humble ourselves before the Lord and he only will lift us up.