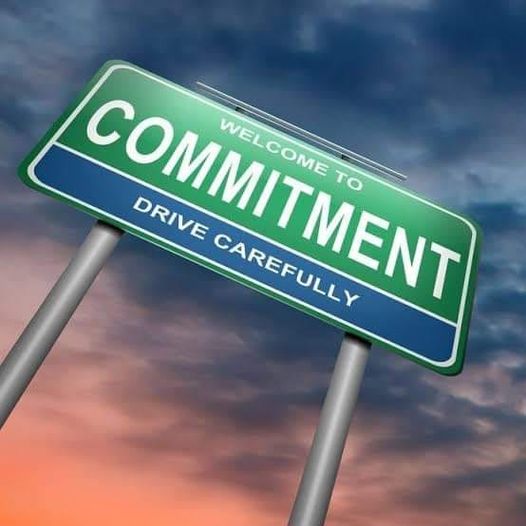 2 Timothy 4:7-8 NKJV
7 I have fought the good fight, I have finished the race, I have kept the faith.
When Julius Caesar landed on the shores of Britain with his Roman legions, he took a bold and decisive step to ensure the success of his military venture. Ordering his men to march to the edge of the Cliffs of Dover, he commanded them to look down at the water below.
To their amazement, they saw every ship in which they had crossed the channel engulfed in flames. Caesar had deliberately cut off any possibility of retreat. Now that his soldiers were unable to return to the continent, there was nothing left for them to do but to advance and conquer! And that is exactly what they did.
All humans have a superpower and it is called commitment. To be committed means that you are focused, determined, disciplined, and with a plan that you follow through.
The truth is that many of us live below that which is possible, that which God desires for us simply because we are not committed and we prefer the easy way out. I have seen people who are necessarily not that gifted in a given area perform so much better than those who are gifted because those who are not gifted put in so much more effort and commitment.
At times we also blame God while the truth of the matter is that we were not committed to the cause and we bailed out as soon as we experienced a little trouble.
Think about Paul, he was committed to what God called him to do and that is to take the gospel to the Gentile nations. Despite all the hardships he went through, things that would easily discourage many of us today making us to abandon the mission, Paul stayed on course.
This is how Paul describes his hardships;
2 Corinthians 11:24-28
24 From the Jews five times I received forty stripes minus one. 25 Three times I was beaten with rods; once I was stoned; three times I was shipwrecked; a night and a day I have been in the deep; 26 in journeys often, in perils of waters, in perils of robbers, in perils of my own countrymen, in perils of the Gentiles, in perils in the city, in perils in the wilderness, in perils in the sea, in perils among false brethren; 27 in weariness and toil, in sleeplessness often, in hunger and thirst, in fastings often, in cold and nakedness— 28 besides the other things, what comes upon me daily: my deep concern for all the churches.
Despite all this, Paul was committed to his calling and nothing would stop him. When his end was drawing near, he was able to look back with confidence and declare that he had fought the good fight and he had run his race and kept the faith. He was confident because he was committed
To be committed means you take responsibility, it means you have clarity on your “why” and you are ready to put your all into it no matter what challenges you face. There is no plan B
The reality is that our commitments will be tested just as Job’s commitment to God was tested. The question is, will we honor our commitments only when things favor us or will we stay committed even when it gets uncomfortable and even painful to us?
Also with so many options available to us today, will we stay committed when something “seemingly” better comes along our path?
Reflections
What are 3 non-negotiable things that you are committed to?
How has that affected your life?
What is that one thing you would be better at if only you stayed committed?