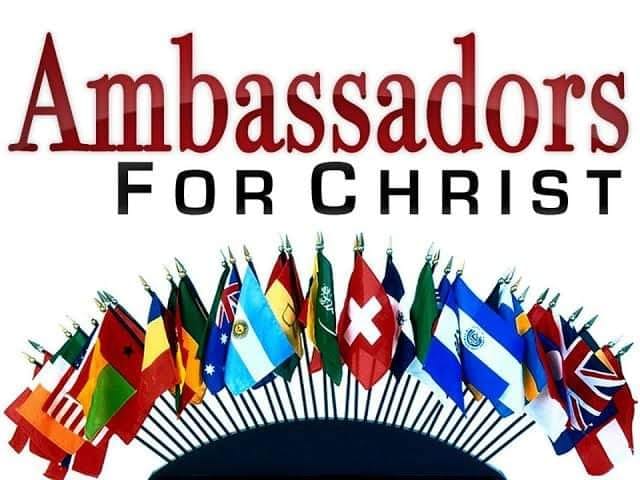 2 Corinthians 5:20 NKJV
Now then, we are ambassadors for Christ, as though God were pleading through us: we implore you on Christ’s behalf, be reconciled to God.
The bible says that we are ambassadors for Christ, but who is an ambassador, and how are they appointed?
An ambassador is a special diplomat who is sent into a foreign territory or land as a representative of the sending nation. His role is to
maintain diplomatic relations with the receiving state and promote foreign policy strategies and the interests of his nation.
This is best said by Jesus in:
John 17:14 NKJV
I have given them Your word; and the world has hated them because they are not of the world, just as I am not of the world.
As Christ’s ambassadors, we are to fulfill the will of our king here on earth. His will is his word, thy will be done on earth as it is in heaven.
Ambassadors must be citizens of the countries that they represent, otherwise how do you represent a nation you don’t belong to? If not, when things get tough, won’t they abandon their responsibilities and run back home? The bible declares that we are citizens of heaven stationed here on earth as ambassadors.
The other thing about ambassadors is that they are not voted into this position, but rather they are chosen and appointed.
Jesus says that he chose us and appointed us that we may bear fruit that remain.
You and I are special diplomats representing heaven here on earth. We are appointed by God himself to represent him and his will,
May we see ourselves in that light wherever it is that he has planted us as his special envoys.
Reflections.
What does being a special diplomat representing heaven on earth mean to you?
Though many people would disqualify you, it is God who chose you and appointed you, what does that mean to you?
Being a citizen of heaven stationed on earth, how then should you act and respond in your dealings here on earth?