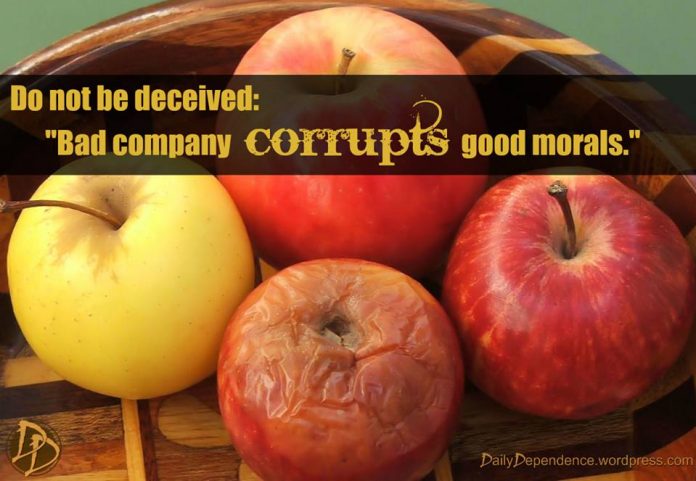 A teacher walks into class with some apples. He calls them his “buddies.” One is a beautiful, shiny red apple and a couple others that look nice but have at least one bruise.
“These two apples with the bruises represent a couple of buddies you should not spend time with in high school,” He says. “They have a dark side to them, a compromised area of their lives. This good apple represents you, a good Christian teenager. The good apple sees no problem with the bruised apples. He says to himself, these are my buddies. They wouldn’t do anything to hurt me. They’re not that bad.”
He then puts the apples together in a plastic bag and says, “These three apples are going to become close buddies for a few weeks. I’ll put them in a closet, and we’ll check on them in a few weeks at the end of the class and see what happens to the good apple.”

Several weeks later, he pulls the plastic bag out of a paper sack. The two bad buddies had really made an impact on the good apple. The identity of all three apples had been lost; the bag now contained discolored, mushy apple soup.

One thing that ruins good character is bad company. As one man said, “Show me your friends and I will show you who you are becoming.” Am I then saying that we steer away completely from people who are not born again and may be a negative influence at all? Not at all, because if we do that, then who will reach out to them. The key word in that verse is “company” This talks about a person who you are associated with, there is closeness. The people who you walk with and confide in on a consistent basis, the people who you walk closely with have a great influence in your life. If you surround yourself with nothing but rotten company then you will also become rotten because they will influence you. One of the key things you see is that the early church placed great emphasis on fellowship with other believers and they did that from house to house, even as the bible says that “Iron sharpens iron!”
Who are you exposing yourself too on a consistent level and allowing to influence your life?